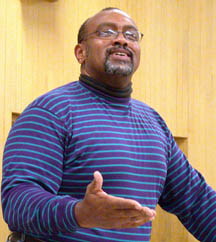 Glenn C. Loury was the first African American Professor to earn tenure at Harvard.  He also achieved prominence as a public intellectual, first as a conservative and then as a more liberal commentator.  Born in 1948, Loury grew up on Chicago, Illinois’ South Side.  His father was a lawyer and his mother worked as a secretary, although the two divorced when Loury was young.  He characterized his childhood circumstances as lower-middle-class.

As a teenager Loury fathered two children, and worked in a printing plant while attending community college.  A scholarship allowed him to graduate from Northwestern University in 1972.  During his last two years in college, he abandoned plans to go to law school, and decided to earn a doctorate in economics.  He moved to Massachusetts to pursue a PhD at Massachusetts Institute of Technology, finishing a dissertation on the concept of social capital in 1976.  Loury returned to Chicago that year to teach at his alma mater.  He later moved to University of Michigan.

In 1982, Loury accepted a tenured position in the economics department at Harvard, becoming the first African American to serve as a tenured Harvard professor.  He moved shortly after that to Harvard’s Kennedy School of Government.  During the early 1980s Loury became increasingly conservative as his writing addressed political questions.  He contended that the civil rights movement had ended, and that African Americans needed to look within black society for the origins of black problems.  Loury also opposed affirmative action.

His stance alienated him from most other black intellectuals at the same time that it won him conservative allies.  His opinions featured in conservative publications such as Commentary, The Washington Times, and The Wall Street Journal.  Loury’s prominence as a conservative also landed him an invitation to a state dinner at the Reagan White House and, in 1987, nomination as Under Secretary of Education.  Charges that he assaulted his mistress led Loury to withdraw his nomination in June of that year.  Six months later, Boston police arrested Loury for possession of cocaine and marijuana.  He spent months in a hospital and a halfway house.

After his release, Loury left Harvard for Boston University.  He also began to change his political stances, growing more critical of conservative intellectuals.  In 1995 Loury resigned from the American Enterprise Institute after the group supported a book he considered to be too conservative.  He changed his views on affirmative action and published a collection of essays in 1996 and The Anatomy of Racial Inequality in 2002, arguing that informal racial stigma shapes African American opportunity and influences perceptions of policy questions.

Loury directs the Institute on Race and Social Division at Boston University, where he is also a professor.  He has won a number of awards including the American Book Award.  He is married and has five children.