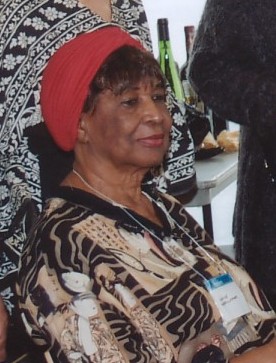 Louise Jenkins Meriwether, a novelist, essayist, journalist and social activist, was the only daughter of Marion Lloyd Jenkins and his wife, Julia.  Meriwether was born May 8, 1923 in Haverstraw, New York to parents who were from South Carolina where her father worked as a painter and a bricklayer and her mother worked as a domestic.

After the stock market crash of October 24, 1929, Louise’s family migrated from Haverstraw to New York City.  They moved to Brooklyn first, and later to Harlem.  The third of five children, Louise grew up in the decade of the Great Depression, a time that would deeply affect her young life and ultimately influence her as a writer.

Despite her family’s financial plight, Louise Jenkins attended Public School 81 in Harlem and graduated from Central Commercial High School in downtown Manhattan. In the 1950’s, she received a B.A. degree in English from New York University before meeting and marrying Angelo Meriwether, a Los Angeles teacher.  Although this marriage and a later marriage to Earle Howe ended in divorce, Louise continues to use the Meriwether name.  In 1965, Louise earned an M.A. degree in journalism from the University of California at Los Angeles.

Meriwether was hired by Universal Studios in the 1950’s to became the first black story analyst in Hollywood’s history.  Beginning in the early 1960’s, Meriwether also wrote and published articles in the Los Angeles Sentinel on African Americans such as opera singer Grace Bumbry, Attorney Audrey Boswell, and Los Angeles jurist, Judge Vaino Spencer. In 1967, Meriwether joined the Watts Writers’ Workshop (a group created in response to the Watts Riot of 1965) and worked as a staff member of that project.

Her first book, Daddy Was a Number Runner, a fictional account of the economic devastation of Harlem in the Great Depression, appeared in 1970 as the first novel to emerge from the Watts Writers’ Workshop.  It received favorable reviews from authors James Baldwin and Paule Marshall.  Daddy Was a Number Runner, is a fictional account of the historical and sociological devastation of the economic Depression on Harlem residents.

Meriwether followed with the publication of three historical biographies for children on civil war hero Robert Smalls (1971), pioneer heart surgeon, Dr. Daniel Hale Williams (1972) and civil rights activist Rosa Parks (1973).  In addition to numerous short stories, Meriwether published novels, Fragments of the Ark (1994) and Shadow Dancing (2000). Louise Meriwether has taught creative writing at Sarah Lawrence College and the University of Houston.  She is a member of the Harlem Writers Guild.