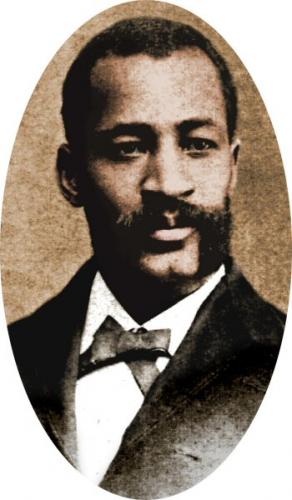 Frederick J. Loudin, teacher, impresario, manufacturer and Fisk Jubilee Singer, had a bass voice the likes of which no one would hear again until the emergence of Roland Hayes and Paul Robeson. At thirty-four, he would become the oldest member of the Fisk Jubilee Singers’ third troupe: a towering, self-assured printer and music teacher from Portage County, Ohio.

Though born a free man in Ohio in 1840, Loudin’s encounters with racism had been searing. His father’s farm was taxed for public education, but his children had to fight to enter school. Loudin proved to be a gifted scholar, but when his teacher rewarded him for his achievements, whites pulled their children out of school. Though his father had donated money to nearby Hiram College, when Frederick applied the college refused to admit him on account of his race. The same held true for the local Methodist Church; though he tithed a ninth of his sparse wages as a printer’s apprentice, the white congregation refused to permit him to sing in their choir.

Once, on a trip to Cleveland, he found that the only way he could secure lodgings was to pose as a slave traveling with his master. Loudin became so discouraged that he declined his parents’ offer to send him to Oberlin College.  Once his apprenticeship was up, however, no one would hire him as a printer.  Loudin moved to Philadelphia, Pennsylvania and married a local resident, Harriet Johnson. Fed up with Northern pretensions of liberality, Loudin went to Tennessee after the Civil War, where he gained a reputation as a basso and music teacher.

George White, the director of the Fisk Jubilee Singers, brought Loudin to Fisk to join the troupe.  Considerably older and more experienced in performance than most Fisk Jubilee singers, Loudin quickly emerged as troupe spokesman.  He also became known as a champion of his people with a bold and sonorous eloquence worthy at times of Frederick Douglass. In the dismal days of Jim Crow in the 1880s, he fearlessly spoke up from even Southern stages against the segregation the Jubilee Singers continued to encounter.

Loudin’s forthright condemnation of racial segregation and discrimination put him at odds with Fisk’s administrators, whom he in turn criticized for working the troupe to death. After George White disbanded his troupe, Loudin formed a company of his own with which he circumnavigated the world, performing in India, China, Hong Kong, Japan and throughout Australia. With his earnings he moved back to Ohio, where he became a successful inventor and manufacturer.

In 1903, Loudin was “stricken with a complete nervous collapse.” Confined to a wheelchair with severe rheumatism, he died a year later at his home in Ravenna, Ohio, surrounded by the “objets d’art, tapestries, brocades, furnishings,” glass canes, and other mementos of a great and sui generis career. He left his collection to the library at Fisk University.