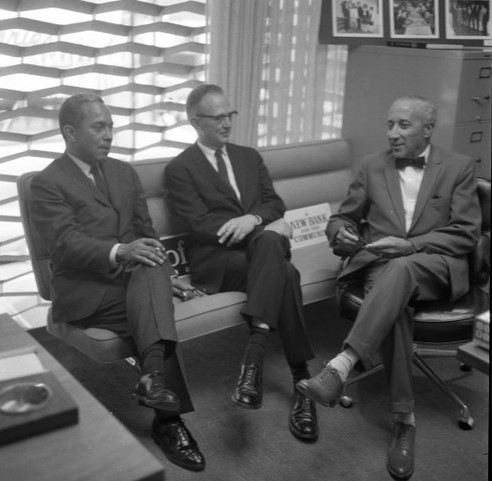 The Bank of Finance, the first state-chartered, black-owned commercial bank in Los Angeles, California, was founded in 1964.  The bank was established by Onie B. Granville, a local real estate broker. Granville was frustrated by his real estate clients’ difficulties in obtaining home loans and the discriminatory practices they faced when attempting to purchase property west of Western Avenue. He also recognized the limitations of savings and loan associations and argued that a commercial bank would provide more services.

Granville brought these issues to the attention of prominent black Angelenos, including Los Angeles City Councilman Tom Bradley, physicians Dr. Perry Beal and Dr. Edward Ballard, real estate broker Lorenzo Spencer, and Wilton A. Clark, owner of the Clark Furniture Company. The group agreed to establish the Bank of Finance and all served on the first board of directors, along with Granville’s sister, Bernice Malbrue.

The Bank of Finance was issued a state charter and opened its doors on November 16, 1964 at 2651 South Western Avenue in Los Angeles. Originally capitalized at $1,050,000, the bank provided mortgages and checking and savings accounts, but unlike savings and loan associations, it also gave loans to black business owners, was a withholding tax depository, and provided personal loans and letters of credit. The bank featured drive-thru windows, an escrow department, and a Christmas club.  Following the Watts Riots of 1965, the bank assisted in the rebuilding of Los Angeles’ inner city. In November 1968, it opened its first branch at 8420 South Vermont Avenue in riot-scarred South Central Los Angeles.

The Bank of Finance began to experience difficulties in the late 1970s. By that point, some of the original board members had passed away or became ill. Others moved on to new business ventures. By 1981, the majority of the shares of the Bank of Finance were transferred to In Young Sung in Cerritos, California and Tadeo Fuse of Osaka, Japan. The name was changed to West Olympia Bank, and it effectively ended its relationship with the African American community.

By 1984. West Olympia Bank also experienced major fiscal problems including under-capitalization. At that point the California State Department of Banking closed the bank. Wilshire State Bank purchased some of the assets and all depositor liability.