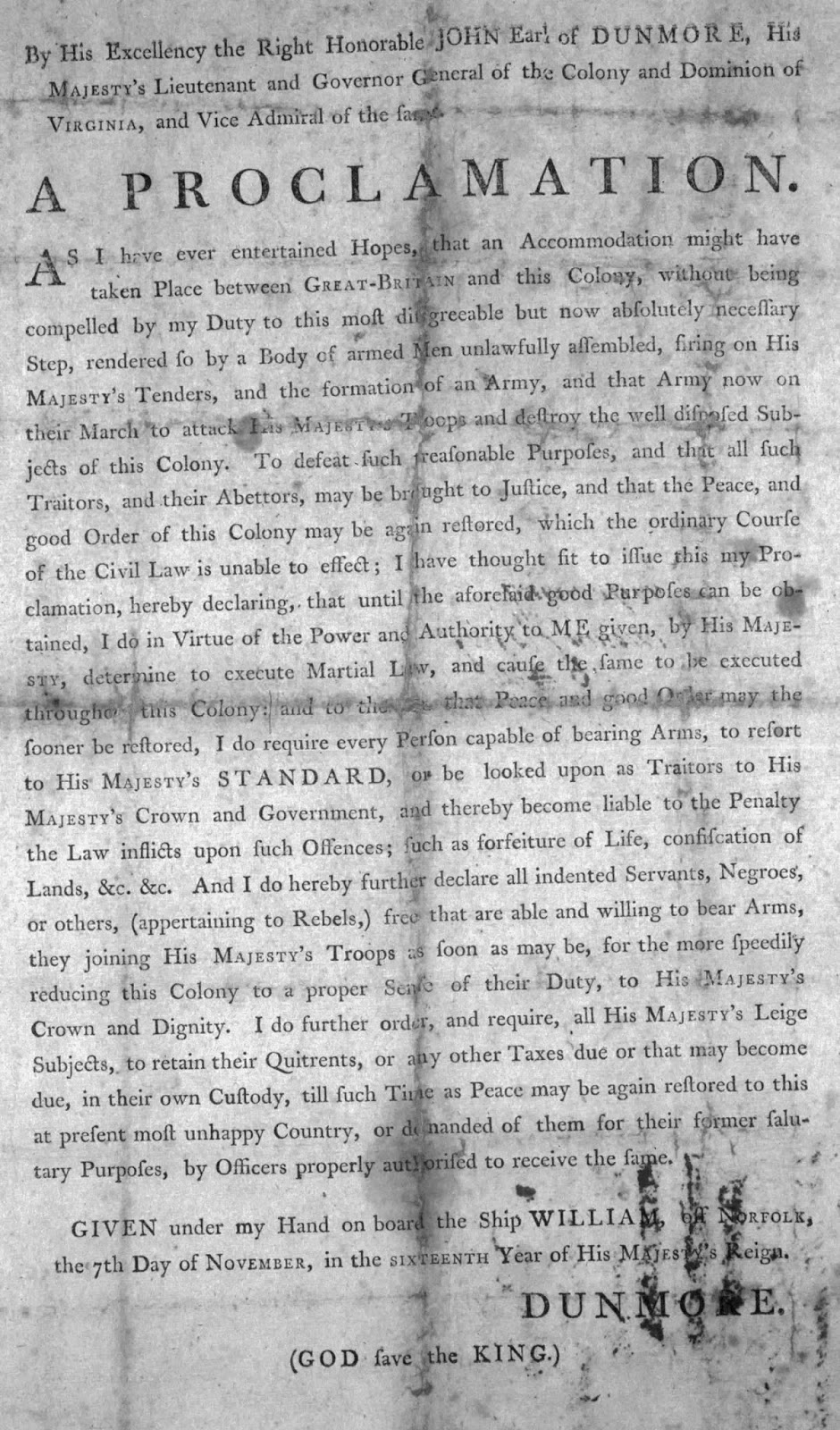 This historic proclamation, dated November 7, 1775 and issued from on board a British warship lying off Norfolk, Virginia, by royal governor and Scottish aristocrat John Murray, Earl of Dunmore, offered the first large-scale emancipation of slave and servant labor in the history of colonial British America. It grew out of Dunmore’s efforts to counter an impending attack on his capital of Williamsburg by patriot militia in the spring of 1775, when he several times threatened to free and arm slaves to defend the cause of royal government.  By the time he retreated offshore he was already gathering slaves seeking refuge; his November proclamation commanding Virginians to support the crown or be judged traitors now formally offered freedom to all slaves and indentured servants belonging to rebels and able to bear arms for the crown. Within weeks, several hundred slaves, many with their families, had joined him. They enlisted in what Dunmore christened his “Ethiopian Regiment” and formed the bulk of the royal troops that first defeated patriot forces but then fell victim to disease and attack, evacuating the Chesapeake Region for New York by August 1776.

Dunmore’s proclamation offered freedom only to those who would flee from rebel masters and serve the crown.  Its purpose was strategic, to disable rebellion, rather than humanitarian, yet its effect was rather the reverse. White southerner colonists swung to oppose royal authority as it appeared that Dunmore and his “Damned, infernal, Diabolical” proclamation were inciting slave insurrection: nothing, it can be argued, so quickly lost the South for the crown.  British officialdom, however, never repudiated the proclamation’s message and soon established an alliance with black Americans that brought thousands of escaped southern slaves to the side of the British forces operating in the south.  The role and plight of these fugitives during and after the Revolutionary War would alter the course of a host of black lives and help swell sentiment, particularly in Britain, for an end to slavery and the slave trade.  A short-term failure, Dunmore’s proclamation set in motion events far beyond its author’s intentions.