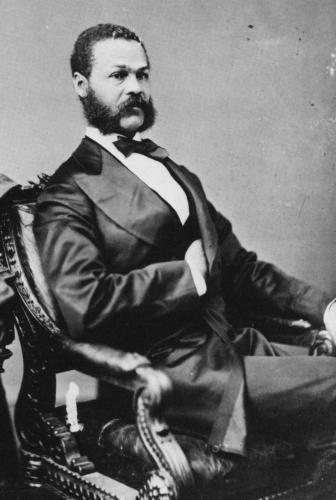 Jefferson Franklin Long, a Republican who represented Georgia in the 41st Congress, was the first black member to speak on the floor of the House of Representatives, and was the only black representative from Georgia for just over a century. Long was born a slave in Knoxville, Georgia on March 3, 1836. Little is known of his early years, however by the end of the civil war he had been educated and was working as a tailor in the town of Macon. He was prosperous in business and involved in local politics.

By 1867 he had become active in the Georgia Educational Association and had traveled through the state on behalf of the Republican Party.  He also served on the state Republican Central Committee.  In 1869 Long chaired a special convention in Macon, Georgia which addressed the problems faced by the freedmen.

In December of 1870 Georgia held elections for two sets of congressional representatives – one for the final session of the 41st Congress (the first two of which Georgia had missed due to delayed readmission to the Union), and one for the 42nd Congress, set to begin in March of 1871. Georgia Republicans nominated Long, an African American, to run for the 41st congress, while Thomas Jefferson Speer, a white American, was chosen to run for the 42nd. Long was elected on January 16th, 1871.

In his only speech to Congress on February 1, 1871, Long opposed a measure which would remove voting restrictions on ex-Confederate political leaders because he felt these men still posed a threat to African Americans political freedom if allowed to regain power. His opposition failed, however, and the bill was approved by the House and two weeks later became a law without President Grant’s signature. Long’s turn in office expired less than one month later.

Jefferson Franklin Long returned to Georgia to campaign for the Republicans.  He addressed a gathering of freedmen and women in Macon on Election Day, 1872.  The freedmen then marched to the polls. A riot broke out shortly after armed whites attacked the group.  Four freedmen were killed and most black voters in Macon did not get to cast their ballots that day. After this, Long became increasingly disillusioned with party politics, and by the mid-1880s was focusing primarily on his business in Macon. He died on February 4, 1907.