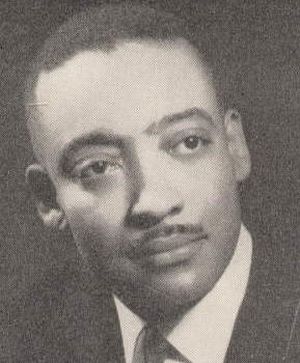 Pioneering black journalist Louis Lomax was born in Valdosta, Georgia on August 16, 1922 to parents Emanuel C. Smith and Sarah Louise Lomax.  He attended Paine College in Augusta, Georiga where he was editor of the student newspaper.  He graduated from Paine in 1942 at the age of 19.

Lomax then entered graduate school at American University where he received an M.A. degree in 1944.  He enrolled at Yale University for additional graduate study and received a Ph.D. from the institution in 1947.

After briefly teaching philosophy at Georgia State College in Savannah, he worked as a reporter for the Baltimore Afro-American and the Chicago American until 1958 when he entered television, producing documentaries at WNTA-TV in New York. Lomax became nationally prominent when Mike Wallace of CBS News chose him to interview Malcolm X for a documentary on the Nation of Islam after the Muslim leader refused to be interviewed by Wallace or other white reporters. That documentary, eventually titled “The Hate That Hate Produced,” provided the nation’s first major exposure to the beliefs of the Nation of Islam.

By 1964, Lomax became one of the first black television journalists to host a 90-minute twice-a-week interview format television show. The Louis E. Lomax Show ran on KTTV in Los Angeles from 1964 to 1968. He interviewed guests on his television program about controversial topics like the Black Panthers and the Nation of Islam, the women’s movement, and the war in Vietnam. He analyzed the black power movement from a vantage point rarely shared by commentators at the time. He also questioned the moderate approach taken by the leadership of the National Association for the Advancement of Colored People (NAACP), and he defended the rebellious young African Americans who had embraced black power.

Despite that stance, he also encouraged whites and blacks to come together, maintaining that race problems were aggravated because people know little about each other. Given his unusual positions, Lomax encountered criticism from all sides. His activities and television program also attracted the attention of the Federal Bureau of Investigation, which looked for any possible involvement of the journalist in “un-American activities.”

Lomax also authored a number of books including The Reluctant African (1960), When the Word Is Given: A Report on Elijah Muhammad and Malcolm X and Black Muslim World (1963), and To Kill A Black Man (1968). He was best known, however, for The Negro Revolt, published in 1962 and focusing on the emerging civil rights movement. A freelance magazine journalist, he also lectured widely on college campuses.

A strong believer in equal rights, he was optimistic about the future of America, predicting in 1966 that the election of a black president would be “very easily done within the next fifteen to twenty years.”

On January 30, 1970 the thrice-married Lomax was killed in a single-car accident near Santa Rosa, New Mexico. He was 47 and left behind a wife, Robinette. At the time of his death Lomax was writing a three-volume history of black Americans.