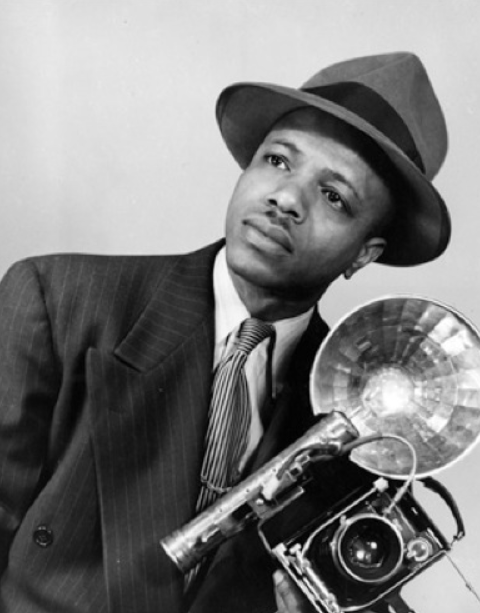 Calvin Littlejohn was an African American photographer in Fort Worth, Texas, who documented the black community for more than forty years, between the 1940s and the early 1990s.  Through his photographs he celebrated the richness and complexity of black culture in segregated Fort Worth.

Calvin Littlejohn was born in rural Arkansas on August 1, 1909, and was reared by his grandparents, Decatur and Nellie Davis.  Littlejohn’s first job was in domestic service with a local white family who paid him enough to cover tuition at Philander Smith College in Little Rock, Arkansas, where he enrolled in 1931 and studied commercial art.  Littlejohn’s natural aptitude for drawing was perfected by correspondence courses in graphic design and a stint in a photo shop where he learned about the camera, lighting, and the use of shadows.

Littlejohn left Philander Smith College after one academic year (1931-32) of college, and moved to Fort Worth when his employers decided to relocate to Texas in 1934 and continued to work in domestic service positions until he accepted a job with the Fort Worth Independent School District, teaching in the Industrial Arts Department.  He soon became the first photographer for I. M. Terrell High School, the only black high school in town.  Littlejohn shot images for the school newspaper and yearbook, and he quickly opened his own studio in his home and helped to establish a black community newspaper, the Lake Como Weekly, also known as the Como Monitor.

During the Jim Crow era, when mainstream newspapers would not publish photographs of black citizens and white photographers would not photograph blacks unless a crime had been committed, Littlejohn provided the African American community’s photographic record.

World War II interrupted Littlejohn’s photographic work when he enlisted in the US Army on July 3, 1942.  He served as an Army private at Fort Leonard Wood in Missouri.  Upon his return from service in 1945, Littlejohn began expanding his scope to include photographing recreation hall parties, speaking engagements, visiting celebrities, church events, school activities, and other everyday events, which produced more candid images than his studio portrait work.  To keep up with the demands of his schedule, he invented the Plantation Printer, which allowed him to expose 46-millimeter film, five frames at a time.

The demands of his successful photography studio, as well as occasional freelance photography for newspapers like the Fort Worth Mind, Lake Como Monitor, La Vida News, the Fort Worth Press, and the Fort Worth Star-Telegram occupied much of his time.  Littlejohn’s work provides a comprehensive portrait of the African-American experience in Fort Worth and Tarrant County, Texas for over five decades.

On September 6, 1993, Littlejohn died at his home in Fort Worth.  He was 84 years old.  His legacy is preserved in the Calvin Littlejohn Photographic Archives housed at the Dolph Briscoe Center for American History at the University of Texas at Austin.