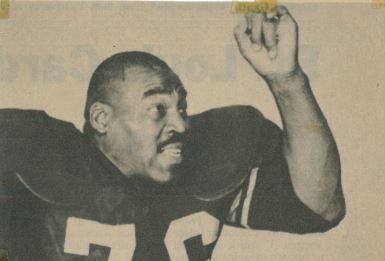 Gene Lipscomb, also known as “Big Daddy”, is best known for his career as a defensive tackle in the National Football League (NFL). Gene Lipscomb was born on August 9, 1931, in Uniontown, Alabama. He never knew his father and when he was three years old, he moved to Detroit, Michigan with his mother Carrie Lipscomb. When Gene was 11 years old, his mother was brutally murdered on her way to work.

Gene, now an orphan, attended Miller High School in Detroit, where he excelled in football due to his size. Unlike most players in the NFL though, Gene Lipscomb did not go to college. Instead, he joined the Marines in 1949 when he was 18 and played football at Camp Pendleton in California.

In 1953, the Los Angeles Rams scouted Lipscomb at Camp Pendleton, and signed him to the team. He was one of the first players who signed with the NFL without any experience as a college player.  In 1956, Lipscomb was released by the Rams, and was signed by the Baltimore (Maryland) Colts, where he played five seasons. It was while playing for the Colts that he acquired his iconic nickname, “Big Daddy.” It was given to him due to his size, as he was 6 feet, 6 inches tall, and weighed 306 pounds. He also called everyone else “Little Daddy,” so others began calling him “Big Daddy.  In 1961, Lipscomb was traded to the Pittsburgh (Pennsylvania) Steelers.

In addition to being a player in the National Football League, Gene Lipscomb also had a short career as a professional wrestler, which he began as a way to stay in shape for football during the offseason.

Although a star in sports, Gene Lipscomb struggled in his outside life. He was known to love drinking, partying, and women. On the night of May 10, 1963, Lipscomb and his friend Tim Black were drinking and partying with a couple of women. Black reported that he and Gene both did heroin at Black’s apartment, and a few hours later, he found Gene unconscious in a chair. Medics tried unsuccessfully to revive him, but Gene Lipscomb was pronounced dead at Lutheran Hospital in Baltimore, at 8:00 a.m. He was 31 years old.