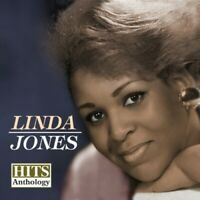 Linda Jones was a popular R&B and soul singer, with a gospel-influenced style because of her family background. Her popularity attracted many fans although her musical career was short due to health issues. Jones was born in Newark, New Jersey, on December 14, 1944.

At the age of 6, Jones joined her siblings in their family singing group, The Jones Singers. The group sang and performed gospel music that influenced much of her later style. During Jones’ teenage years she began performing rhythm and blues. Jones worked at a pie factory while would performing at local clubs. After one performance she was introduced to record producer George Kerr by Jerry Harris. Jones signed a contract and in 1963 at the age of 19, Jones released her first solo record under the name Linda Lane.

In May 1967 Jones released the single, “Hypnotized,” penned by Richard Poindexter and Robert Poindexter, with Loma Records, a Rhythm and Blues subsidiary of Warner Bros. records. The song quickly climbed the charts and became her biggest hit, reaching no.4 on the Billboard R&B chart and no. 21 on the Billboard Hot 100.

In September 1967 Jones released “What’ve I Done (To Make You Mad)” which reached no. 61 on the Billboard 100 and no. 8 on the Billboard R&B chart, giving her back-to-back top ten singles in the U.S. R&B charts. After Loma Records was cancelled by Warner Bros in 1968, Jones signed with Neptune Records, founded by Philadelphia writers and producers Kenny Gamble and Leon Huff.

While Jones’ influence and style were popular, her musical career was short because of health complications. According to account provided by her daughter, Terry Jones, after returning home from a 1972 performance, Jones was in her room resting when her mother, entering the room to awake her for the next performance, found Jones in a diabetic coma. Jones was rushed to the hospital but died there on March 14, 1972, at the age of 28.

After Jones died, three albums of previous and unreleased material were released on the All-Platinum Label created by Joe and Sylvia Robinson. In 2008 Jones’ daughter, Terry Jones, and artist and producer Helen Bruner posthumously released an album featuring Linda Jones’s vocals. The same year, one of her songs, “Baby I Know,” was nominated for a Grammy award in the Best Traditional R&B Vocal Performance category.  In 2009 Jones’ Your Precious Love” Live album was released on the Phil’erzy Productions label honoring Linda Jones in her hometown of Newark, New Jersey on what would have been her 65th birthday.