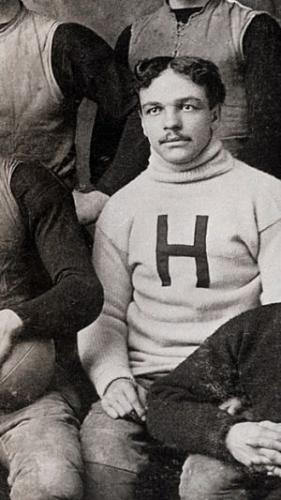 William H. Lewis, was a world-class collegiate athlete, lawyer, and politician.  Lewis, the son of former slaves Ashley Henry Lewis, a Baptist minister, and Josephine Baker, was born in Berkeley (now Norfolk), Virginia in 1868. He began his college education at Virginia Normal and Collegiate Institute at age 15 but transferred to Amherst a year later, graduating in 1891 in the same class with Calvin Coolidge.

Lewis played football at Amherst and was elected team captain in his senior year (1890). He was also likely the first African American football player to be recognized as an All-American. Lewis entered Harvard Law School in 1891 and played on the varsity football team where he was again elected team captain. These were firsts for African Americans at both institutions. Lewis graduated from Harvard Law School in 1895.  In 1896 Lewis married Elizabeth Baker and together they had four children. She predeceased him in 1943.

Shortly after his graduation, Lewis was hired as a football coach at Harvard. He remained in that post for eleven years. Though he was never the head coach, he was the first coach in the institution’s history to be paid. In 1896 he published “A Primer of College Football” which was serialized by Harper’s Weekly. The publication established Lewis as an authority on fundamentals, training, and defensive strategy.  Today’s neutral zone at football’s line of scrimmage was originally proposed by Lewis and adopted throughout college football in 1906.

Despite his football knowledge and fame, Lewis’ primary interests were civil rights, the practice of law, and government service. Lewis successfully launched a political career serving three years on the Cambridge City Council and one term in the Massachusetts State Legislature between 1896 and 1902.

On July 30, 1903, Lewis presided at the famous gathering of the National Negro Business League in Boston, now often referred to as the Boston Riot. It was Lewis who called for the police to take away a persistent heckler of Booker T. Washington as the latter attempted to speak. In a follow-up trial he also testified for the prosecution against William Monroe Trotter who was accused of disrupting the speech.

That same year, President Theodore Roosevelt directed that the U.S. Attorney General for Boston appoint Lewis as an Assistant United States Attorney.  He became the first African American to hold that post. From 1907 to 1911, Lewis was Roosevelt’s appointee as Chief of the Naturalization Bureau for six New England States.

In 1910, Roosevelt’s successor, President William Howard Taft, in the face of Southern Senate opposition, nominated Lewis to the post of United States Assistant Attorney General, a sub Cabinet appointment which was then the highest Federal position ever attained by an African American. Lewis served in the position from 1911 to 1913.

In 1911, Lewis was also the first African American to be admitted to the American Bar Association (ABA), which provoked a campaign to oust him.  Lewis refused to resign, and the ABA Executive Committee voted to oust him in 1912.

Following the election of President Woodrow Wilson, a Democrat, in 1912, Lewis built a successful private practice. He earned a reputation as an outstanding trial lawyer and became one of the first black attorneys to join the legal team of the newly created National Association for the Advancement of Colored People (NAACP).  Lewis joined Sigma Pi Phi fraternity and continued to practice law until his retirement. He died in 1949 in Boston at the age of 81.