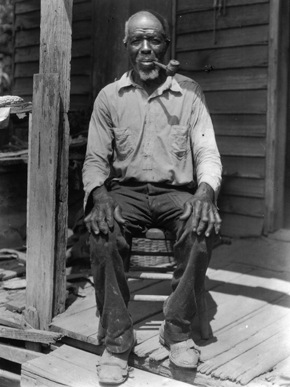 Cudjo Lewis is considered the last survivor of the last slave ship to enter the United States. Born around 1841 to a Yoruba family in the Banté region of Dahomey (today Benin), he was given the name Oluale Kossola (Kazoola). At age fourteen, Kossola began his training as a soldier and was inducted into oro, the Yoruba secret male society; by age nineteen, Kossola was undergoing initiation. His initiation training was cut short, however, in the spring of 1860 when soldiers from Dahomey raided Kassola’s town, killing townspeople and taking prisoners. Though he attempted escape, Kossola was among the captured to be marched to Ouidah, a port city on the Atlantic coast of Benin, and imprisoned in a slave compound. He was sold to William Foster, captain of the Clotilda, a schooner built by Foster in Mobile, Alabama and later converted into a ship capable of illegally transporting Africans as slave cargo into the United States.

Kossola was among the 110 enslaved Africans to spend an estimated forty-five days aboard the Clotilda. Upon entering the Mississippi Sound on July 9, 1860, Kossola and seven other bondsmen were transferred to James Meaher, brother of Timothy Meaher. When James Meaher could not pronounce Kossola’s name, Kossola told Meaher to call him “Cudjo.” Cudjo worked on a steamship and was subject to overwork and poor living conditions for five years. On April 12, 1865, Union soldiers informed Cudjo and other slave workers on the steamboat that they were free.

Upon emancipation, Cudjo left James Meaher’s plantation and took the name Lewis. Desiring to return to Africa, he and his Clotilda captives attempted to acquire reparations in the form of repatriation or land. In 1872, after failing to receive either, Cudjo and the Mobile Africans pooled their resources and purchased land from the Meahers and other wealthy whites to form a settlement, which they named Africa Town. Cudjo resided in Africa Town for the remainder of his life. He became a citizen of the United States in 1868 and a Baptist in 1869.

In 1880, Lewis legally married Celia (Abile), a fellow Clotilda capture who had lived with Cudjo since 1866. Together they had five sons and one daughter. Cudjo worked as a shingle maker until 1902, when he was injured in a train accident. He then became the church sexton for Africa Town. In 1927, Zora Neale Hurston famously interviewed and filmed Cudjo, who, as historian Sylviane A. Diouf notes, is the “only known African deported through the slave trade whose moving image exists.” Cudjo achieved further recognition after being interviewed by numerous other writers and journalists.

Cudjo Lewis survived his fellow Clotilda companions, leaving him the last survivor of the last slave ship to enter the United States. He died on July 26, 1935 at the estimated age of 94.

Sylviane A. Diouf, Dreams of Africa in Alabama: The Slave Ship Clotilda and the Story of the Last Africans Brought to America (NY: Oxford University Press, 2007); http://www.encyclopediaofalabama.org/article/h-1403.