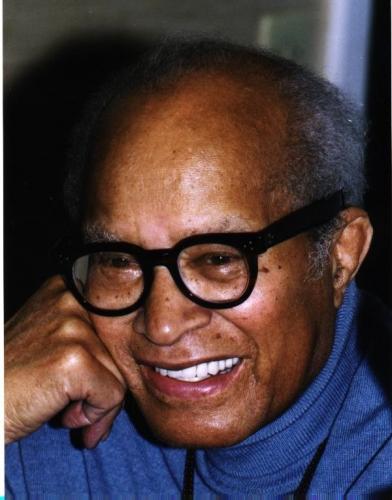 Hylan Garnett Lewis was a distinguished sociologist and pioneer in the field of community studies whose work helped guide the study of American race relations for more than half a century. Throughout his life, Lewis analyzed, and sought remedies for, the problems of the poor and unemployed. He also studied discrimination against people of color in corporate employment, foster care, and schools.

Hylan Lewis was born on April 4, 1911 in Washington, DC, one of five children of Ella Wells and high school principal Harry Whythe Lewis. His early years were spent in Washington and Hampton, Virginia; and in1932 he received a bachelor’s degree from Virginia Union University.

He was an Instructor of economics at Howard University, switching to sociology after meeting E. Franklin Frazier there in 1935. That year, he married Leighla Frances Whipper, a writer and Graduate Student at Howard. The couple had one child, Carole Ione. The marriage ended in divorce, and a second marriage to Audrey Carter produced a son, Guy Edward.

Lewis earned his masters in 1936 at University of Chicago and was a Rosenwald Fellow from 1939-1941. He subsequently worked for the Office of War Information and had appointments at Talladega University, University of North Carolina at Chapel Hill, and Hampton University.

In 1947, Professor Lewis was at Atlanta University, when anthropologist John P. Gillan approached him. Gillan was director of study documenting southern communities funded by a Rosenwald Grant to the University of North Carolina’s Institute for Research into Social Science. Undertaking the study, Lewis became a participant/observer of the black community of the town of York, S.C. between 1948 and 1949. The resultant work became the subject of his 1951 doctoral thesis at The University of Chicago and was published as Blackways of Kent in 1955.

The book is a classic ethnographic study providing a unique glimpse of community formation in a segregated southern town before the major changes that occurred in the wake of the Brown v. Board of Education of Topeka decision and the Civil Rights Movement.

From 1959 to 1964, Dr. Lewis directed a major child-rearing study with the Health and Welfare Council in Washington and then during Lyndon B. Johnson’s presidency, Dr. Lewis was a part of the inner circle of scholars and government officials who helped craft the President’s Great Society policies.

In 1967,Dr. Lewis became Senior Vice President at Metropolitan Applied Research Corporation, a New York City consulting firm led by longtime friend, psychologist Dr. Kenneth B. Clark. He taught at Brooklyn College between 1967 and 1977 and the City University of New York Graduate Center between 1967 and 1990. Between 1988 and 1989 he served as a Revson Fellow at City College and in 1990 he was appointed the first Michael Harrington Professor at Queens College.

His numerous honors include the Distinguished Scholar Award from the Association of Black Sociologists in 1973 and the Du Bois Johnson Frazier Award by the American Sociological Association in 1976. An honorary degree of Doctor of Humane Letters was conferred by Long Island University in 1997.

On March 8, 2000, Hylan Garnet Lewis died in Versailles, France at the age of 88, surrounded by family members.