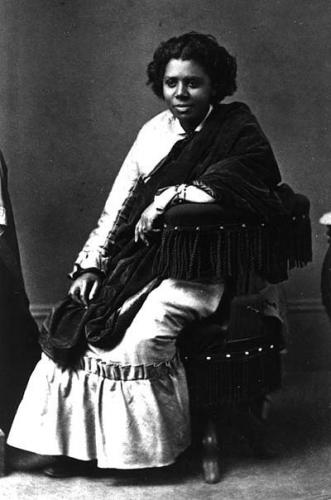 Edmonia Lewis, the first woman of African American and Native American ancestry to gain notoriety as a sculptor, was born near Albany, New York on July 4, 1845 to a Chippewa Indian woman and an African American man.  Her parents died when she was very young, so she was raised by her mother’s sister and the Chippewa people in Niagara Falls.  Edmonia also had an older brother, Samuel Lewis, who migrated west during the California Gold Rush.  Lewis made a small fortune in the gold fields, part of which he used to send Edmonia to Oberlin College in Ohio.  Although the college was one of the first to admit African American women and men as well as white women, Lewis encountered racial problems.  In 1862 she was accused of attempting to poison two white coeds.  She was cleared of the charges but continued to be subject to verbal attacks and a beating that left her bedridden for days. Oberlin’s administration refused to allow her to enroll the next year to complete her graduation requirements.

With Samuel’s financial help, Edmonia moved to Boston to study with master sculptor Edward A. Brackett.  She soon became impatient with her apprenticeship status and decided to sculpt her own work.  Again with her brother’s financial backing, Edmonia Lewis opened her own studio in Boston.  In 1864, she created a sculpture of Colonel Robert Gould Shaw, the white commander of the all-black 54th Massachusetts Infantry Regiment.  The sculpture became popular among Bostonians and she was soon able to sell over 100 plaster copies of the work.  She also made medallion portraits of abolitionists such as John Brown and William Lloyd Garrison.

With some money and notoriety, Lewis moved to Rome, Italy in 1865, an international center at the time of writers, poets, and artists, to continue her studies.   She joined a large international artistic community that included other women sculptors such as Harriet Hosmer, Anne Whitney, Margaret Foley, and Emma Stebbins. Lewis began to work in marble and adopted the neoclassical style.  She continued to find inspiration in the lives of abolitionists and Civil War heroes who were the subjects of virtually all of her work.

Lewis’s sculptures of African, African American, or Native American people were particularly popular among American tourists in Rome.  Some of her most famous works included Forever Free (1867) which depicted a black woman and black man celebrating the Emancipation Proclamation; Hagar in the Wilderness (1868), a sculpture of an Egyptian handmaiden; the Old Arrow Maker and His Daughter (1872) which showed Native Americans; and The Death of Cleopatra (1875) which was eventually acquired by the National Museum of Art in Washington, D.C.

Edmonia Lewis disappeared from public view in the 1880s.  Her last known sculpture appeared in 1883.  She died in London, England on September 17, 1907.