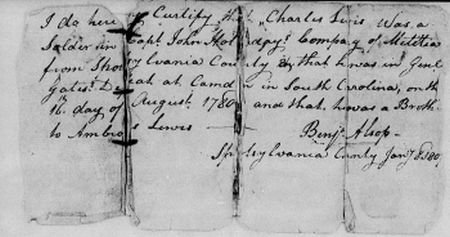 Charles Lewis was a sailor and soldier during the American Revolutionary War.  Lewis was born sometime around 1760 in Spotsylvania County, Virginia on Bel Aire, the Lewis Family Plantation owned by John Lewis. John and a free mulatto woman, Josephine Lewis, were the parents of Charles and his younger brother, Ambrose.  Lewis and his brother were born free but their mother was indentured to John Lewis.

On April 15, 1776, Charles Lewis and his brother entered into the naval service of Virginia when they served on board the Galley Page, a warship commanded by Captain James Markham.  On March 20, 1778, they entered the Naval Service of the United States when they joined the crew of the USS Dragon commanded by Captain Eleazor Callender.

Charles and Ambrose Lewis completed their terms in the Navy on April 15, 1779.  They then enlisted as privates in the Second Virginia Regiment, commanded by Col. George Stubblefield.  By 1780 they were serving in Captain John Holliday’s Company of Virginia Militia which was assigned to General Horatio Gate’s Army in South Carolina.  There they fought at the Battle of Camden on August 16, 1780 where outnumbered British forces under Lord Cornwallis defeated Gate’s much larger Army. During the fighting Ambrose was wounded, captured, and held as a prisoner on board a British prison ship at Charleston.  He remained a prisoner until the end of the War in 1783. Charles survived the battle and was mustered out of the Army in 1780.

By 1781 Charles Lewis had returned to Virginia and was living in the city of Richmond.  It is unclear if he received land for his service in the Revolutionary Army as most white soldiers did but by this point he was a property owner.  He owned a warehouse at Rocketts Landing, in the city, and land in Northumberland County.  According to the 1782 Census for the City of Richmond he also owned a house in that city which he rented to a three person family.

Around 1782 Lewis married a woman named Susanna and the couple had three children, John, Francis, and Nancy. Ambrose survived British imprisonment and moved to the Fredericksburg area where he married Fanny Williams whose freedom and that of her brother, Francis, had been purchased by Charles Lewis.  Ambrose and Fanny had several children who continued to live in the Fredericksburg area through the 1830s.

Charles Lewis meanwhile continued to live in Richmond and was listed as a barber there in 1811.  He died in Richmond in 1833.  He was approximately 73 at the time of his death.