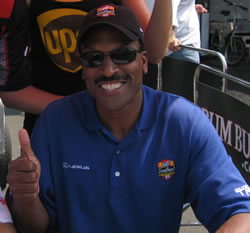 Veteran auto racer Bill Lester was born February 6, 1961, in Washington, D.C. Lester earned a Bachelor of Science Degree in Electrical Engineering and Computer Science from the University of California, Berkeley in 1984 and worked at Hewlett-Packard for a year before becoming a race car driver.

Lester became a professional driver when in 1985 he entered and won the Sports Car Club of America (SCCA) Series Northern California Region Rookie of the Year title.  One year later he won the SCCA GT-3 Regional Road Racing Championship.  In 1989, Lester began racing in the International Motor Sports Association’s (IMSA) GTO Series and several other sports car series in the United States.

Lester has raced in all three divisions of the National Association for Stock Car Auto Racing (NASCAR): the Craftsman Truck Series, Busch (now Nationwide) Series, and the premier series, the Sprint (formerly Nextel) Series. Between 1998 and 2001 he raced in the SCCA Trans-Am Series and in the Rolex 24 Hours of Daytona.

Lester’s performance in that race led to him to make five starts for Bobby Hamilton Racing (BHR) in the Truck Series in 2001, before getting the nod to drive full-time in 2002.  Lester raced for BHR in 2002 and 2003 in a Dodge Ram truck.  He completed the two seasons ranked 17th and 14th, respectively.

In 2004, Lester signed on with Bill Davis Racing (BDR) to drive the #22 Tundra as Toyota made its debut in the NASCAR Craftsman Truck Series. During his three years with BDR, Bill amassed numerous top five and top 10 finishes and gave Toyota back-to-back pole positions in 2005 at Kansas Speedway and Kentucky Speedway.  When Lester made his NASCAR Nextel Cup debut in 2006 at the Atlanta Motor Speedway in March he became the first African American to drive in that series in 20 years.