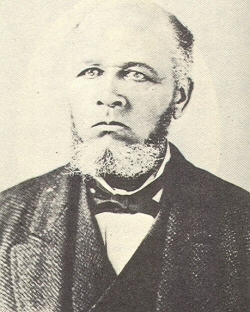 Peter Lester moved with his wife Nancy and five children to San Francisco from Philadelphia in 1850, where he was appalled to find that slavery was still a fact of life in the free state of California. In an attempt to do something about this, he invited black slaves and domestic workers into his home to lecture about their rights and to teach them anti-slavery songs.

Mr. Lester was making his living as a bootblack and boot maker in San Francisco when he met Mifflin W. Gibbs in the early California gold rush days. They became partners in the firm Lester & Gibbs, and opened up a successful shoe store in 1851 bearing the name (according to Mr. Gibbs) “Emporium for Fine Boots and Shoes, imported from Philadelphia, London and Paris.” This business saw wide success in both wholesale and retail, and the pair became very wealthy.

Despite this success, Peter Lester was not pleased with the way blacks were treated in California. After two white men assaulted him in his store with a cane and stole a pair of shoes, he could not press charges against the men because courts did not allow testimony by African Americans. In 1858, Lester’s 15-year-old daughter Sarah Lester became part of a local uproar when the pro-slavery San Francisco Herald printed an anonymous letter demanding her removal from an otherwise all-white school. After several weeks of active debate on the matter, Peter removed his daughter from the school. In response to these events, as well as a newly introduced measure by the state legislature to ban any black immigration to California, the Lesters participated in a mass exodus of African Americans to Victoria in Canada, where he resided until his death sometime after 1891.