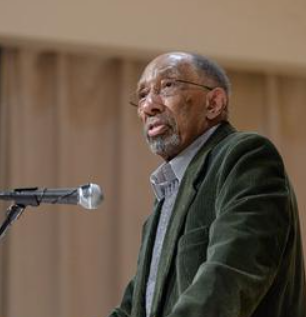 Scholar and civil rights activist Julius Lester was born January 27, 1939 in St. Louis, Missouri, the son of a Methodist minister. Lester spent much of his childhood in Missouri, where in the 1940s and 1950s he dealt with southern attitudes about race and segregation before and during the Civil Rights movement. In 1960 Lester graduated from Fisk University in Nashville, Tennessee with a degree in English.

He then became politically active in the Civil Rights movement, going to Mississippi in 1964 as part of the movement called the Mississippi Summer Project.  Lester then began working full time for the Student Nonviolent Coordinating Committee (SNCC) as head of its photography department in Atlanta, Georgia. SNCC was the most outspoken of civil rights groups at the time, and in the summer of 1966 coined the phrase black power, a cry millions of blacks across the United States responded to and adapted as their own.

Lester’s writing career began in 1967 when a publisher read his essay “The Angry Children of Malcolm X,” and offered him a contract to develop it into a book. The book, titled Look Out, Whitey! Black Power’s Gonna’ Get Your Mama, was published in 1968, and would be the first book to explain the term black power and place it in the context of African American history.

As a child Lester learned that his maternal great-grandfather was a German Jew named Adolph Altschul who had immigrated from Germany sometime before the Civil War. He met a fair-skinned ex-slave named Maggie Carson and they had six children together one of whom was Lester’s grandmother. This knowledge became one motivating factor in Lester’s conversion to Judaism in 1982, prompting him to adopt the Hebrew name, Yaakov Daniel ben Avraham v’Sarah.

Lester joined the faculty of the University of Massachusetts at Amherst in 1971 as a professor of African American Studies. In 1988 he joined the Judaic and Near Eastern Studies Department and taught courses there and in the English and History departments until his retirement in January 2004. During his years at the University of Massachusetts Lester became the only faculty member to be awarded all three of the University’s most prestigious faculty awards: The Distinguished Teacher’s Award, the Faculty Fellowship Award for Distinguished Research and Scholarship, and the Chancellor’s Medal, the University’s highest honor. The Council for Advancement and Support of Education selected Lester as the Massachusetts State Professor of the Year in 1988.

From 1991 until 2001 Lester served as lay religious leader of Beth El Synagogue in St. Johnsbury, Vermont. Julius Lester died on January 18, 2018 in Palmer, Massachusetts.  He was 78.