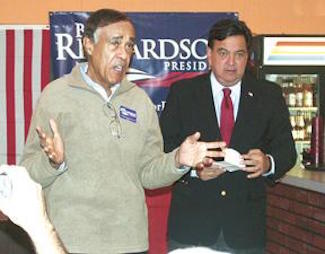 Alexander was born in Frankfurt, Germany on November 9, 1948 to an African American father from Houston, Texas, who at that point was part of the U.S. Army of occupation. His mother was born in France.  They married in Germany and Alexander grew up in both France and Germany. Having lived only briefly in the United States, in New York City, New York, during his childhood, Alexander’s primary and secondary school years were spent in France.

Alexander attended the Munich branch of the University of Maryland, from which he received a bachelor’s degree in 1970.  He joined the U.S. Foreign Service in 1971. Through the State Department Foreign Service Institute (FSI) in Maryland Alexander studied Economics, earning a certificate in 1980, and the Portuguese language, earning a certificate in 1983. Between 1985 and 1986 Alexander attended the U.S. Naval War College, from which he received a master’s degree.

Alexander began his overseas assignments as Vice Consul in Georgetown, Guyana from 1970 to 1973. He then served as an Economic Officer at the U.S. Embassy in Norway from 1973 to 1975. Alexander was subsequently assigned to be Consul in Krakow, Poland, but he claimed the office had a hostile working environment, so he left this post nine months before his normal tenure would have ended.

While waiting for another assignment, Alexander worked in the State Department’s Visa office. In 1978, Alexander landed another overseas assignment, this time as the Program Officer for Mexico in the State Department’s Bureau of International Narcotics Matters.  He held that post until 1980. Alexander’s next assignments were as the Economic Officer at the U.S. Embassy at Madrid, Spain, 1981-1983, and Principal Officer at Porto Alegre, Brazil from 1983 to 1985.

From 1986 to 1989 Alexander was Counselor for Economic Affairs at the U.S. Embassy in Rome, Italy. He served as Deputy Director for Caribbean Affairs at the Department of State from 1989 to 1991. Alexander was then assigned by the State Department to be Deputy Chief of Mission and then Charge d’Affaires at the U.S. Embassy in Haiti from 1991 to 1993.

Ambassador Alexander is now retired and living in Florida with his wife, Deborah McCarthy, a career Foreign Service Officer. The couple have two daughters, Margaret and Natalia.