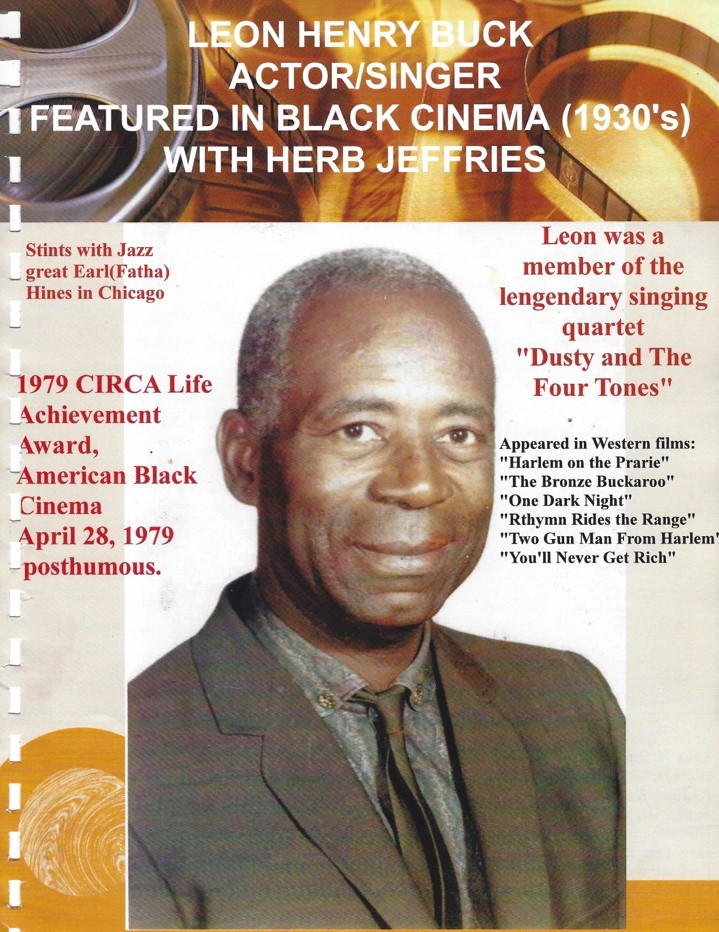 Leon Henry Buck was the first-born child to Ulysses Simpson Grant Buck and Janie Buck in Clarksville, Tennessee on April 15, 1916. He had seven brothers and sisters and attended racially segregated schools in Clarksville. In each step of his educational experiences, he graduated with honors.

Buck enrolled in Lane College in Jackson, Tennessee in 1934 where he studied music. That year he met three young men: Lucius Brooks (Dusty), Ira Harding, and Rudolph Hunter who along with Buck formed the singing group, The Four Tones Singing Quartette. At that time, Lane College did not approve of the music they sang so they left college to pursue a musical career.

In 1936, Buck and the Four Tones migrated to Dallas and soon afterwards were featured in the Hall of Negro Life during the Texas Centennial Exposition of 1936 in that city. The group then began traveling and performing in night clubs and by 1939 they changed their names to Dusty and The Four Tones.

Leon Buck was also a pioneering actor in Black cinema. He appeared in many Hollywood motion picture productions with Dusty and the Four Tones, but he also stared in the first “all colored” western: Harlem on the Prairie (1937). Other films followed including Two-Gun Man From Harlem (1938), Rhythm Rodeo (1938), The Bronze Buckaroo (1939) and Harlem Rides the Range (1939), all with Herbert Jeffrey. His last film, Mantan Messes Up, with the comedian Mantan Moreland, was released in 1946.

In 1940, Dusty and the Four Tones recorded “My Heart is Aching for You” written by Buck. Also, the group, supported by film star Dorothy Dandridge, regularly played in several Hollywood venues. In 1942, Buck was drafted into the U.S. Army and was honorably discharged in 1945 and returned to Los Angeles.

In 1956, with his career in music now over, Leon Buck returned to college and obtained his credentials from California State University at Northridge, California. He then began teaching at Vaughn Street Elementary School and remained there until his retirement in 1975.

Leon Henry Buck died in Los Angeles on April 27, 1976 at the age of 63. In 1979, Buck was posthumously given the Communication and Information Resource Center Administration (CIRCA) Award at the Institute of Arts in Detroit, Michigan.