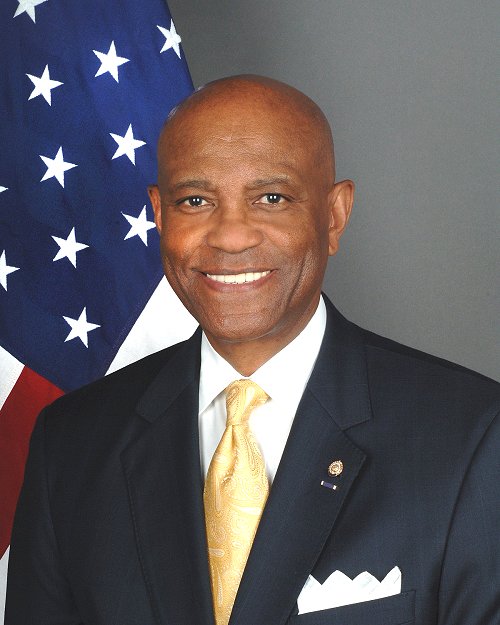 Alfonso E. Lenhardt is currently Acting Administrator of the United States Agency for International Development (USAID). He previously served as the U.S. Ambassador to the United Republic of Tanzania from 2009 to 2013.

A native of New York City, New York, Ambassador Lenhardt began his career in the United States Army in 1966. During his time in the service he was chief of staff to the Director for the Strategic Defense Initiative Organization, Director of Personnel and Installation Management for the largest unit in the U.S. Army, head of military police, and finally commanding general of the U.S. Army Recruiting Command.  Lenhardt retired in August 1997 after 31 years of service.

From 1997 to 2001 Lenhardt served as Executive Vice President and Chief Operating Officer of the Council on Foundations, a nonprofit membership association of grant making foundations and corporations whose mission is to promote responsible and effective philanthropy.

On September 1, 2001 Lenhardt became the first African American appointed as an officer to the United States Congress. In his capacity as the Senate’s Sargeant-at-Arms and Doorkeeper he provided protection for the Senate and its members during the September 11, 2001 terrorist attack and the 2001 anthrax mail threat.  He oversaw a staff of 826 employees and a $52 million annual budget.

After working with the Senate, Lenhardt became the Senior Vice President of Government Relations for Shaw Environmental and Infrastructure, Inc. an engineering, technology, and construction firm in Baton Rouge, Louisiana. From 2004 to 2009 Lenhardt was President and CEO of the nonprofit National Crime Prevention Council in Washington, D.C.

In 2009 President Barack Obama nominated Lenhardt to be U.S. Ambassador to Tanzania. After U.S. Senate confirmation, he was appointed and arrived in Dar es Salaam, the capital of Tanzania, to present his credentials on November 12, 2009.

On May 16, 2010, while still serving as U.S. Ambassador to Tanzania, Lenhardt was accredited to serve as the U.S. representative to the East African Community, a regional political and economic organization of five African nations: Burundi, Kenya, Rwanda, Tanzania, and Uganda.

In 2014 Lenhardt was appointed Deputy Administrator of USAID, the world’s largest bilateral aid agency and is now serving as Acting Administrator. In his current role he is charged with overseeing the organization’s mission of eliminating poverty and supporting democracies in developing nations around the world.