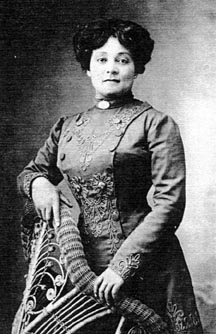 Lena Lowery Sawner was Oklahoma’s first Black public school principal as well as its first female public school principal. She was also prominent in state and national Black educational organizations. Lena Lowery rose from humble beginnings. Her father, Julius Lowery was born in North Carolina in 1846 and had been a slave. He married Priscilla Crane, born in Indiana ten years later, and together they farmed in Indiana until the Oklahoma Land Rush of 1893. They homesteaded near Newkirk, Oklahoma, just south of the Kansas border, and prospered there enough to be able to send their only daughter to the University of Chicago, where she took her A. B. degree in 1902.

After graduation Lowrey returned to Oklahoma and started teaching at the Douglass School, an all-Black elementary school with 12 students, in Newkirk. She was the town’s first Black teacher and eventually became principal of the Douglass School in 1902, serving in that role until failing eyesight caused her to retire in 1934.

In 1903 Lowery married George Sawner, a businessman, attorney, and political activist, from Chandler, Oklahoma. They had no children of their own but fostered two young people, Grace McCormick and Nell Margaret Beridon.

Lena Lowery Sawner played important roles in the development of education in Oklahoma. In 1911, Lee Cruce, the second Governor of Oklahoma, appointed her to be a delegate to the National Negro Educational Congress held in Denver, Colorado. She was a member of the Oklahoma Association of Negro Teachers, a group instrumental in improving the skills of Black teachers, and beginning in 1910 her Douglass School was the first county school to provide free adult education and literacy classes (The Daily Oklahoman, 25 Oct. 2016). In 1911, she was appointed by Governor Cruce to represent Oklahoma at a conference of Black Educators in Omaha. In 1947 she received an award from the National 4-H Conference for organizing 4-H clubs across Lincoln County. In 2016, Lena Sawner was inducted posthumously into the Oklahoma African American Educators Hall of Fame.

Lena Lowery Sawner died on March 1, 1949, in Chandler. She was 74 years old at the time of her death and is buried in Newkirk, Oklahoma.

Hannibal B Johnson, Acres of Aspiration: The All-Black Towns in Oklahoma (Eakin Press, no place, no date); Hannibal B. Johnson, The Sawners of Chandler: A Pioneering Power Couple in Pre-Civil Rights Oklahoma (Ft. Worth: Eakin Press, 2018); frequent articles in Black Dispatch between 1920 and1940, the leading Black newspaper in the state, published by Roscoe Dunjee in Oklahoma City.