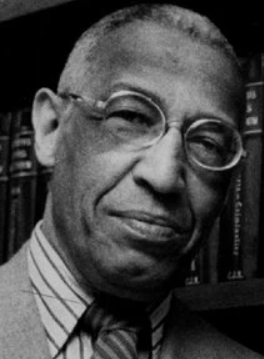 Judge George Neves Leighton and his twin sister, Georgina, were born in New Bedford, Massachusetts on October 22, 1912, to Cape Verdean immigrants Antonio Neves Leitao and Anna Silva Garcia Leitao. His last name was changed,with his parents permission, to Leighton by an elementary school teacher who could not pronounce “Leitao.”

As a child laborer, Leighton worked closely with his father in the cranberry bogs, strawberry patches, and blueberry bushes of Cape Cod. His father, Antonio Neves, was well educated in Brava, Cape Verde Islands, spoke fluent Portuguese and Cape Verdean Creole but never became fluent in English. George remembers barely speaking English until he attended Howard University.  Although he had not completed high school because he went to work on an oil tanker at the age of 16, he began taking night classes.

At age 21, while working at a restaurant in Boston, Leighton entered an essay contest in New Bedford. He tied for first place and won $200.00.  He then wrote to Howard University in hopes of being admitted that fall.  He received a response letter indicating that matriculation without a high school degree was not possible but as an adult he could take classes, pay regular tuition and fees, and have his record reviewed for possible matriculation in the future. Leighton took that suggestion, studied voraciously, and graduated from Howard University on June 7, 1940 (Magna Cum Laude) at the age of 27.  While at Howard he was admitted to Phi Beta Kappa Honorary Society, earned a commission in the Army Reserve Officers Training Corp, and a scholarship to Harvard University Law School.

Leighton’s law school studies were interrupted in 1942 when he was drafted into the U.S. Army. He attained the rank of Captain of Infantry and when the war ended in 1945, he left military service and returned to Harvard Law School. Graduating from the institution the following year (1946) with an L.L.B. degree, he moved to Chicago, Illinois.

Passing the Illinois Bar exam in 1947, Leighton later served as the Chairman of the Legal Redress Committee of the Chicago NAACP and was appointed an Illinois Assistant Attorney General for the Chicago area in 1949. In 1951 Leighton co-founded Moore, Ming, and Leighton which became one of the largest predominantly black law firms in the nation.  He also served as the President of Chicago’s NAACP and in 1964 was elected a Cook County Circuit Court judge. In 1969 Leighton became the first African American to be appointed to the Illinois Appellate Court. President Gerald Ford nominated Judge Leighton to serve as a U.S. District Court Judge in 1975 and he was confirmed by the U.S. Senate on February 2, 1976.

At age 75, Judge Leighton retired from the U.S. District Court and joined the law firm of Earl L. Neal & Associates.  During his long career as an attorney and judge, he mentored several young Chicago lawyers including Barack Obama and was proud to live to see him become the first African American President of the United States.

In 2005, the New Bedford Post Office was renamed in his honor and in 2012 Chicago’s Cook County Courthouse was named The George N. Leighton Criminal Court Building. He and his late wife, Virginia Berry Quivers (who died in 1992), had two children, Virginia Anne and Barbara Elaine. On October 22, 2017, Judge Leighton celebrated his 105th birthday at the Veterans Administration hospital in Brockton, Massachusetts.

Judge George Neves Leighton died on June 6, 2018 at the age of 105 in Brockton, Massachusetts.