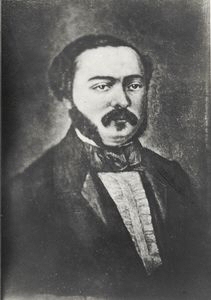 Although little remembered today, Leidesdorff was a social, economic and political force in pre-gold rush San Francisco, California with a number of “firsts” credited to his name. When he was named the U.S. Vice Consul to Mexico in 1845, he became the nation’s first African American diplomat.  He was elected to San Francisco’s first city council and its first school board in 1847.  He built the first hotel, the first shipping warehouse, he operated the first steamboat on San Francisco Bay, and he laid out the first horse race track in California.

Born on the island of St. Croix in the Danish West Indies, now the U.S. Virgin Islands, in 1810, William was the son of Danish sugar planter Alexander Leidesdorff and Anna Marie Sparks, a light-skinned woman of mixed race ancestry.  In 1841 Leidesdorff sailed his 106-ton schooner Julia Ann around Cape Horn to California and settled in the Mexican village of Yerba Buena on San Francisco Bay.  Over the next three years he became a successful merchant by making frequent trips between California, Mexico and Hawaii.  In 1844 governor Micheltorena confirmed his land grant of 35,000 acres on the American River.  Ranch Rio de Los Americanos was located near the spot where James Marshall discovered gold in January 1848. When Leidesdorff died unexpectedly in May 1848 he was given the honor of being buried inside Mission Dolores Church, where his gravestone may still be seen today.