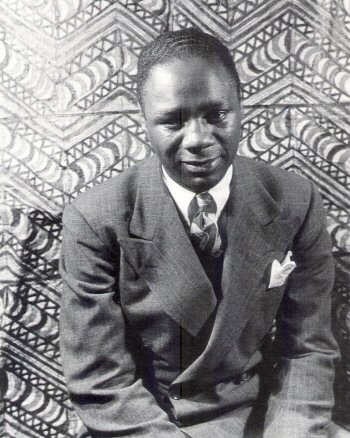 Canada Lee (the adopted name of Lionel Cornelius Canegata) was a noted 20th Century jockey, boxer, and actor.  Born on May 3, 1907 in New York City’s San Juan Hill district, he attended Public School 5 in Harlem. Canegata began his musical education at the age of seven, studying violin with the composer J. Rosamond Johnson. At the age of fourteen he ran away to the Saratoga Race Track in upstate New York to become a jockey. After two years of jockeying he became a horse exerciser for prominent racehorse owners.

In 1923 Canegata moved to Harlem and became an amateur prize fighter, entering the ring with manager Jim Buckley. Over the next three years he emerged the victor in 90 of 100 fights and won the Metropolitan Inter-City and Junior National Championships.  Then he went on and won the national amateur lightweight title. In 1926 he turned professional, changed his name to Canada Lee, and by 1930 he was a leading contender for the welterweight championship. Lee fought in over 200 fights as a professional boxer, only losing 25.  In 1933 a detached retina ended his boxing career and he returned to music.

In 1934, after leading an unsuccessful band, Lee auditioned at the Harlem YMCA for Works Progress Administration (WPA) theatrical production Brother Mose. Lee got the role but soon turned to motion picture acting.  In 1935 at the age of 28 he played a stevedore named Charlie in Alfred Hitchcock’s movie, Lifeboat. This was the first major movie in Hollywood where the black character was not cast in a stereotypical role.

Despite that success on the silver screen, Lee returned to the theater and won his first critical acclaim as Banquo in the Federal Theater’s black version of Macbeth. He also played Jean Christophe in Haiti with Rex Ingram. In 1939 he had a featured role as Draylon in Mamaba’s Daughters, staring Ethel Waters. He also narrated the CBS radio program, “Flow Gently, Sweet Rhythm.”

In 1941 Lee played Bigger Thomas in the film Native Son to great critical and popular acclaim. Lee appeared six other films throughout the 1940s.  He played a sailor in South Pacific in 1943 and a prizefighter in Body and Soul in 1947.  Canada Lee declared that he would only take roles that educated society about race and enhanced the image of African Americans.  His passionate devotion to equality was reflected in his theatrical and film roles.

Canada Lee died of a heart attack on May 9, 1952. His health in the past two years had been in decline he had collapsed in Africa at the end of filming Cry the Beloved Country where he played the lead actor. Lee left behind his wife Juanita Waller and their two children.