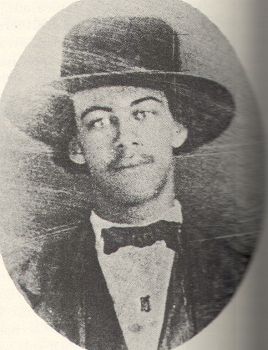 Lewis Leary was one of several Black men who were killed during John Brown’s raid on the Harpers Ferry arsenal in October 1859. It was a defining moment in African American history.

Born Sherrard Lewis Leary (sometimes referred to as Lewis Sheridan Leary), he was the second of five children born in Fayetteville, North Carolina to free Black parents. His father Matthew Leary, a saddle maker, was the mixed-race son of Jeremiah O’Leary, a descendant of Irish immigrants. His mother Julia A. Menriel Leary was of mixed race, with conflicting accounts of her heritage.

Frustrated with southern racism, twenty-one-year-old Leary moved to Oberlin, Ohio in 1856 where he earned a living as a harness maker. It was no coincidence that Leary found a more hospitable environment at Oberlin. Members of his extended family lived in the area, including his nephew, John Anthony Copeland, Jr., who also participated in the Harpers Ferry raid. Located in Lorain County, southwest of Cleveland, Oberlin was at the time home to a concentrated network of Black and white abolitionists and served as an important site on the Underground Railroad. The town was also the site of Oberlin College, the first interracial and co-educational college in the country. Two years after moving to Oberlin, he married Mary Sampson Patterson, and they had one daughter, Lois.

Leary quickly became involved in the town’s abolitionist movement, joining the Oberlin Anti-Slavery Society. He participated in the Oberlin-Wellington Slave Rescue, in which he assisted John Price, a runaway slave. After a dramatic effort to keep Price from federal marshals, the rescuers helped him cross the border to Canada and freedom. Thirty-seven men were arrested and indicted for violating the Fugitive Slave Law of 1850. Charges were dropped against Leary and most of those arrested. Soon after, Leary and Copeland joined white abolitionist John Brown’s effort to engineer an armed rebellion of slaves at the Harpers Ferry arsenal in Cleveland, Ohio.

On October 6, 1859, Leary and Copeland left Oberlin for Cleveland and arrived nine days later at John Brown’s headquarters, a farmhouse near Harpers Ferry. The attack on the arsenal began the following evening, and Leary, Copeland and John Henry Kagi found themselves cut off from the others. As they attempted to escape, they were fired upon. Kagi was killed instantly. Leary was severely wounded and would die a day later. Copeland escaped injury but was later hanged. It is not known what happened to Leary’s body. Two months after the raid, residents of Oberlin conducted a memorial service for the three residents who had died the conflict: Leary, Copeland, and Shields Green.

After his death, Lewis’s wife Mary married Charles Henry Langston and moved to Kansas. They had a daughter Caroline Mercer Langston, who later married James Hughes. The couple became the parents of the Harlem Renaissance poet, Langston Hughes.