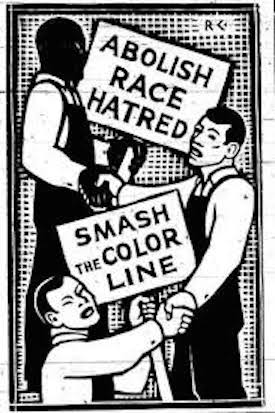 The League of Struggle for Negro Rights (LSNR) was the primary civil rights organization of the American Communist Party (CP) during the early-to-mid 1930s. Founded in St. Louis in 1930 after the dissolution of the American Negro Labor Congress, the group established regional branches throughout the nation, but was most active in Harlem and Chicago, Illinois. B.D. Amis was the LSNR’s first General Secretary, followed by Harry Haywood. In 1934, Langston Hughes was appointed as honorary president and served in that capacity until the organization disbanded in 1936.

The LSNR ostensibly worked toward the realization of the Communist International’s radical 1928 “Resolution on the Negro Question,” which argued for land redistribution in the South and for African Americans’ right to self-determination through the creation of a sovereign nation-state in the Black Belt. In practice, however, the LSNR focused less on the theoretical right of self-determination and more on militantly agitating for social and civil equality through its newspaper, The Liberator, and through direct action protests against lynching, tenant evictions, Jim Crow segregation, legal frame-ups including the infamous Scottsboro rape trials and other manifestations of racial injustice. Reflecting the sectarian nature of the American CP in the early 1930s, the LSNR carried on a contentious feud with mainstream civil rights organizations like the NAACP and Urban League, whom it branded “Negro misleaders,” although on a local level LSNR branches demonstrated more willingness to engage in coalition politics.

Despite its strident appeals for racial justice, the LSNR never developed a mass following outside of Communist Party circles. National membership peaked at around 10,000 in the mid 1930s; meanwhile, local branches outside of the core areas of CP strength often faded as fast as they arose. The LSNR’s limited appeal reflected both African Americans’ general skepticism toward the Communist Party, and in particular the Party’s idea of a separate black nation, as well as the LSNR’s own jurisdictional ambiguity amid the numerous other CP sponsored organizations fighting for racial justice, including the International Labor Defense, the Trade Union Unity League, and the Unemployed Councils. In 1936 as the Communist Party entered its “Popular Front” period, Party leadership decided to dissolve the LSNR and fold its resources into building the National Negro Congress, a remarkable coalition of disparate civil rights and labor organizations under a unified program of liberal reform. The NNC held its first national convention in February of 1936 and would serve as the CP’s primary vehicle for civil rights activism until anticommunist pressure forced it to disband in 1947.