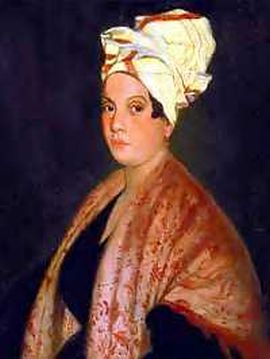 Few lives in African American history are surrounded by more myth and misinformation than the life of Marie Laveaux. Although she is best known today as the “legendary Creole voodoo priestess of New Orleans,” Laveaux was in fact a 19th century hairdresser, confidant, and community leader in New Orleans, who tended the sick and financed charitable and benevolent organizations.

Marie Laveaux was born a free woman of color on September 10, 1801, to free blacks Marguerite D’Arcantel and Charles Laveaux. She was described as a quadroon, a term which meant one quarter African. In antebellum New Orleans, she and other part-African people were privileged because of the three-tier racial system that dominated the city. She lived long enough however to see that three-tier system evolve into a two-tier system (white and black) in the post Civil War period.

Laveaux was baptized as a Roman Catholic when she was only six days old and despite her embracing voodoo practices, remained a devout Catholic until her death.  Unlike other black Creoles, however, Laveaux never learned to read or write.

In 1819 she married Jacques Paris who was originally from Santa Domingo (now Haiti) in the St. Louis Cathedral, the largest and oldest church in the city.  Paris was also a quadroon.  Their marriage was brief.  Paris disappeared after one year, giving rise to the idea of Laveaux’s mysterious powers.

In 1821 Laveaux “married” Captain Christophe Glapion, who was the scion of one of the aristocratic families in New Orleans. Since interracial marriages were officially banned in Louisiana, Laveaux and Glapion lived together for the next thirty-four years in a home at 15 Anne Street until his death in 1855. Glapion fathered Laveaux’s five children, three daughters and two sons.

Although Laveaux was rumored to have been wealthy, public records show otherwise. When Glapion died heavily in debt, for example, the house on Anne Street was auctioned off to Phillipe Ross, a wealthy benefactor who immediately allowed Laveaux and her children to remain there, an act which added more intrigue to this new widow.

Both before and after her husband’s death, Laveaux worked as a hairdresser, drawing her clientele from among New Orleans’s white elite. Through information she gleaned in her occupation and her extensive network of informants, Laveaux was able to amass considerable influence, if not wealth.

She also became a benefactor in her own right, raising ten children who were not her own and caring for black and white residents during the recurring yellow fever epidemics that swept across New Orleans. She helped finance churches and held prayer with death row inmates in New Orleans.

Laveaux is best known, however, for her practice of voodoo. This mystical religious practice had its roots in Africa but morphed into new forms in the New World and especially in Haiti, which was the place of origin for thousands of free and enslaved immigrants into New Orleans.  According to her defenders, Laveaux used voodoo rituals to promote good health and compassion among her clients.  Her detractors argued otherwise.  Regardless of her intentions, Marie Laveaux, by the time of her death on June 15, 1881, had become, by far, voodoo’s most famous practitioner in the city of New Orleans.