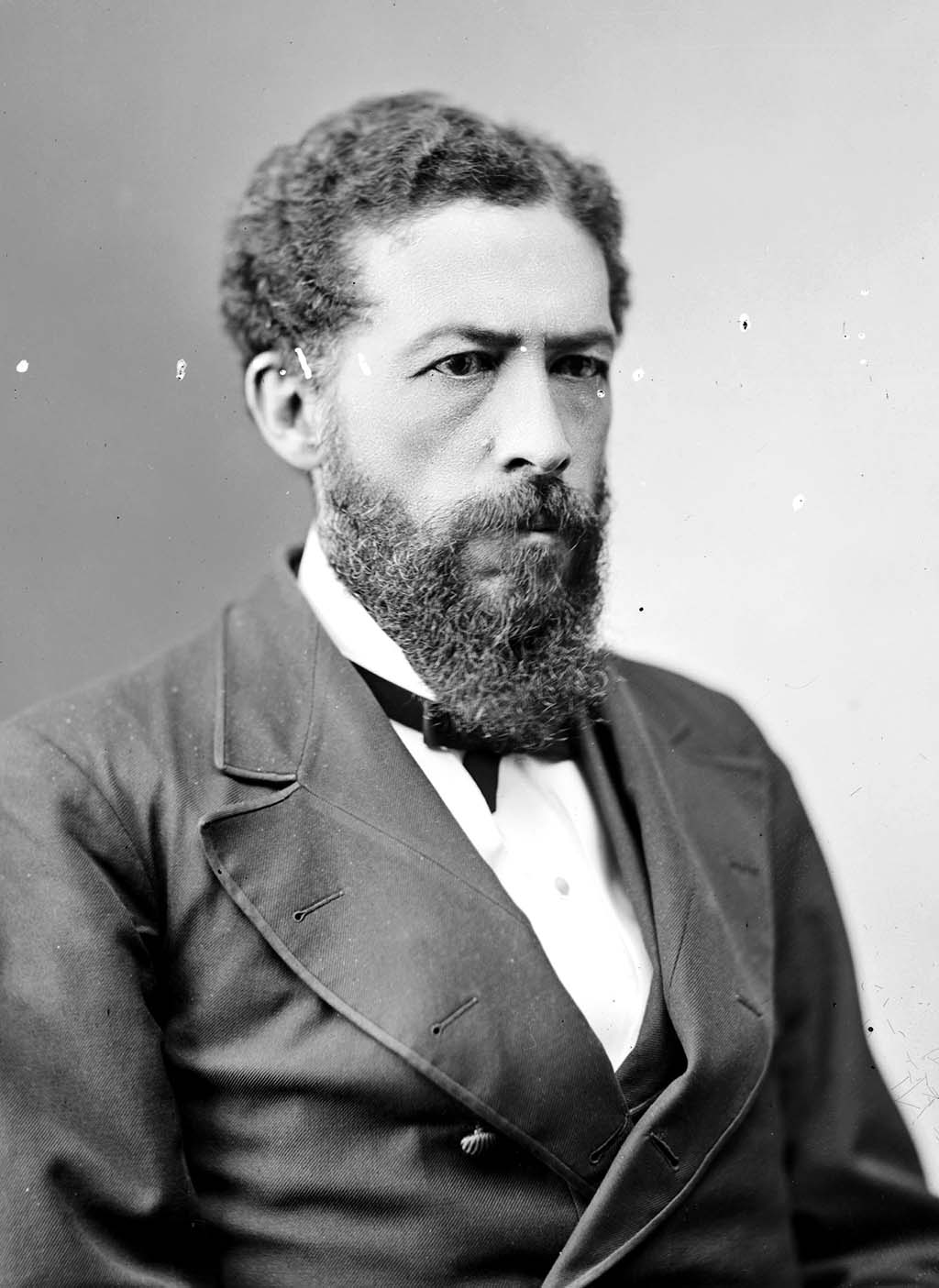 John Mercer Langston, the youngest of four children, was born a free black in Louisa County, Virginia on December 14, 1829. Langston gained distinction as an abolitionist, politician, and attorney.  Despite the prominence of his slaveowner father, Ralph Quarles, Langston took his surname from his mother, Lucy Langston, an emancipated slave of Indian and black ancestry.  When both parents died of unrelated illnesses in 1834, five-year-old Langston and his older siblings were transported to Missouri where they were taken in by William Gooch, a friend of Ralph Quarles.

At fourteen Langston began his studies at the Preparatory Department at Oberlin College. Known for its radicalism and abolitionist politics, Oberlin was the first college in the United States to admit black and white students.  Langston completed his studies in 1849, becoming the fifth African American male to graduate from Oberlin’s Collegiate Department.

In 1854, Langston married Caroline Matilda Wall, an emancipated slave from North Carolina.  She and Langston had remarkably similar backgrounds.  Both had been born into slavery and were freed by their slaveowning fathers who provided for them financially.  Once freed and sent north, they were able to obtain an education.  When Wall was a young girl, she and her sister, Sara, were sent to Ohio by their father, Colonel Stephen Wall. Under the guardianship of a wealthy family friend, the sisters were brought up in an affluent Quaker household. Like Langston, Caroline Wall also attended Oberlin, graduating in 1856.

In 1855 Langston was elected town clerk of Brownhelm Township in Ohio, becoming the first black elected official in the state.  In addition to his law practice and activities as town clerk, Langston and his brothers, Gideon and Charles, participated in the Underground Railroad.  John Mercer Langston caught the attention of Frederick Douglass, who encouraged him to deliver antislavery speeches.  During the Civil War, Langston recruited black volunteers for the Massachusetts 54th Infantry Regiment, officially the country’s first African American military unit.

In 1868 Langston moved to Washington, D.C. to help establish the nation’s first black law school at Howard University.  He became its first dean and served briefly as acting president of Howard in 1872.  In 1877, President Rutherford B. Hayes appointed Langston U.S. minister to Haiti.  He returned to the U.S. in 1885 and became president of Virginia Normal and Collegiate Institute (now Virginia State University).

In 1888 John Mercer Langston ran for a seat in Congress as an Independent against a white Democratic opponent.  The election results were contested for 18 months.  Langston was finally declared the winner and served the six remaining months of his term.  Langston lost his reelection bid in 1890.  Partly because of his prominence, the Oklahoma Territory town of Langston, and the college created in the town, Langston University, were named after him.  John Mercer Langston died in Washington, D.C. on November 15, 1897 at the age of 67.