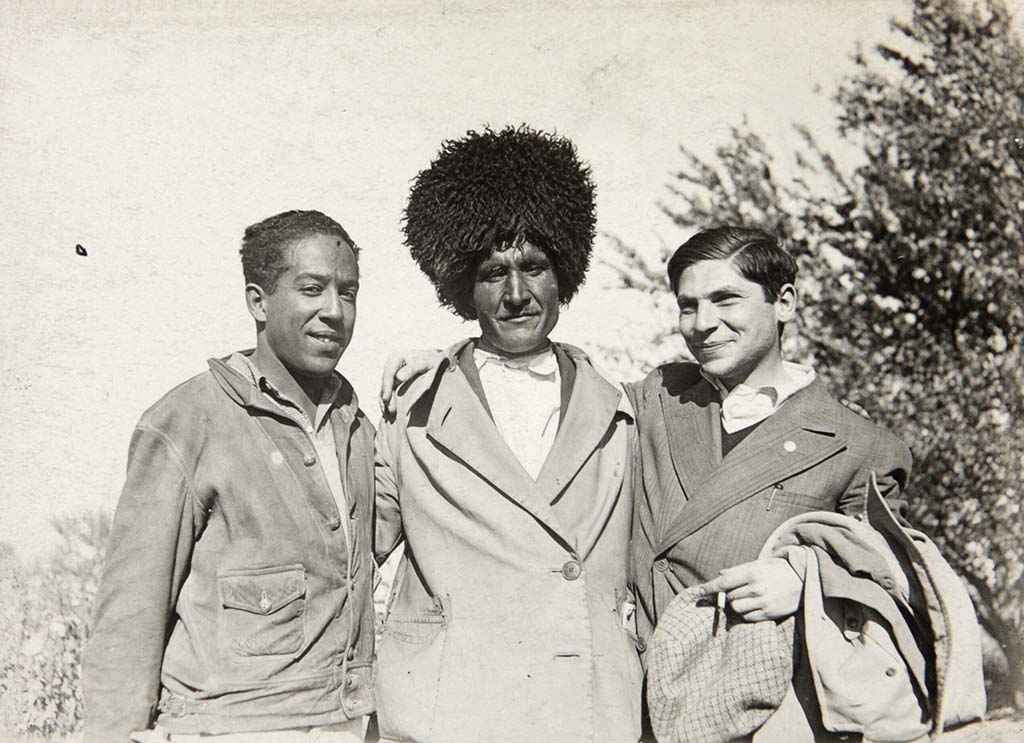 In June of 1932, poet Langston Hughes, political activist Louise Thompson, and 22 other African American artists, filmmakers, and actors, traveled to the Soviet Union (USSR) to create a film about African American life in the American south. The film, aptly titled Black and White, was to focus on the many examples of racial discrimination experienced by blacks in the region as well as to counter the many black stereotypes plaguing the film industry at the time.

Thompson, who was a founding member of the Harlem branch of the Friends of the Soviet Union, saw this film as an opportunity to express her frustration with the bias of American cinema, as well as to further relations with the USSR, which she and others saw as a haven for African Americans and other people of color around the world.  The USSR agreed to help with the project, partially because of the success of their 1929 film China Express, about working class revolt in that nation. At this time, the Soviets were actively seeking African American support believing they, as the most oppressed group in the United States, would be the most likely instigators of a Soviet-style working class revolt. They saw the creation of this film was a step towards that goal.

The movie, however, was never made. It was initially claimed that the cancellation of the movie was due to a lacking script; however, Hughes later confirmed that the real reason for the cancellation was the unexpected recognition of the USSR by the Franklin Roosevelt administration. Before this, the United States refused to acknowledge the existence of a Soviet state, prompting the USSR to continuously harass and berate the American government. When the US finally agreed to recognition, one of the conditions was that the USSR must cease all propaganda directed specifically towards African Americans. Thus, the movie project was dropped. The majority of the actors who accompanied Hughes returned to the US. Hughes, however, stayed in the USSR, touring the country and assessing the new Communist regime for another four months.

Hughes, sympathetic to the Bolshevik Revolution and the new Soviet Union since he first learned of it in high school, now decided to tour the agrarian Soviet republics in the southeast region of the USSR beginning in September 1933. Normally, these Soviet-controlled republics were off limits to foreigners, but Hughes, although not Communist, had engendered unprecedented respect from the Soviets.

Hughes toured south-central Asia, commenting on the similarities in this region to the American south, as both were major producers of cotton. In his 1934 book A Negro Looks at Soviet Central Asia, Hughes wrote. “In the autumn, if you step off the train almost anywhere in the fertile parts of Central Asia,” he wrote, “you step into a cotton field or into a city or town whose streets are filled with evidences of cotton nearby. The natives call it ‘white gold’. On all the dusty roads, camels, carts and trucks loaded with the soft fiber go towards the gins and warehouses. Outside the towns, oft-times as far as the eye can see, the white balls lift their precious heads.”

From September 1932 to the end of January 1933, Hughes visited Tashkent, Samarkand, and Bukhara in what is now Uzbekistan, and Ashgabat in what is now Turkmenistan where the Soviets led him on tours of various schools, hospitals, factories, and other settings for everyday Soviet life. For a majority of the time, Hughes was accompanied by numerous Asian artists, intellectuals, and other creative people. Hughes ended his USSR tour in late January 1933 when he traveled to Korea, China, and Japan.  In the latter nation he was detained and then expelled from the country by the Japanese secret police for being a “radical.” Langston Hughes finally returned to the US on August 9, 1933, with a much greater perspective on various world affairs.