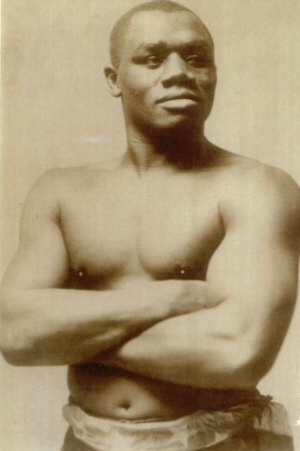 Sam Langford was one of the greatest fighters in boxing history. Born in Weymouth Falls, Nova Scotia on March 4, 1886, the 5’ 7” dynamo migrated to Boston, Massachusetts, and engaged in close to 300 officially recorded professional contests from 1902 to 1926. He was an exceptionally courageous and intelligent fighter with long arms and an impressive upper torso. He also packed a tremendous wallop in both hands and knocked out many of the much larger and talented boxers of his day. In 2003, Ring Magazine’s writers listed him second on their list of the 100 greatest pound for pound punchers of all-time.

Despite his obvious qualifications Langford never received an opportunity to fight for a world championship. There were two reasons for this, first he was black and it was convenient for many of the top white contenders to draw the “color line” to avoid facing him, and second he was too good to risk one’s crown against. Time after time after becoming the first black heavyweight champion, Jack Johnson refused to fight Sam, eventually admitting that he had no wish to risk his title against Sam. Even the legendary Jack Dempsey admitted his reluctance to face Langford, writing in his own biography: “The hell I feared no man. There was one man, he was even smaller than I, I wouldn’t fight because I knew he would flatten me. I was afraid of Sam Langford.”

In 1955 Sam became the first boxer to be voted into the Boxing Hall of Fame without having ever won a world championship, although at various times he held the heavyweight championship title in countries such as England, Australia, and Mexico.  He ended up blind and penniless, but never regretted his chosen profession and expressed no bitterness or remorse over the lost of his eyesight. He maintained a keen sense of humor and kind disposition throughout his life and always said that boxing provided him with a wealth of memories. Fiercely proud of what he’d accomplished during his life, and genuinely grateful for the experiences that had come his way, Sam contentedly lived out the last few years of his life in relative obscurity in a private Boston area nursing home. Visited shortly before his death, Sam remarked to a visitor, “Don’t nobody need to feel sorry for old Sam. I had plenty of good times. I’ve been all over the world. I fought maybe 600 fights, and every one was a pleasure!”