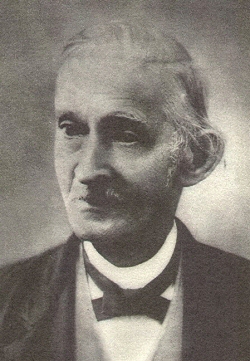 Born a free person of color in New Orleans, Thomy Lafon was the son of a Frenchman and a free woman of Haitian descent who had been born in Louisiana to a slave mother. Lafon’s father deserted the family when Lafon was a young boy.  Lafon was self-educated.  By 1842, when he was 32, Lafon was listed in the New Orleans City Directory as a merchant.

In 1868, Lafon began to build his fortune from real estate and businesses.  His fortune in 1870 was estimated at $250,000 making him at the time the wealthiest African American in the nation.  Despite his wealth Lafon lived in a modest house at 242 Ursulines Street.

Although a successful businessman, Lafon would be remembered for his philanthropy.Thomy Lafon founded the Lafon Orphan Boys’ Asylum and the Home for Aged Colored Men and Women. He also donated to other charitable and religious organizations including the American Anti-Slavery Society, the Underground Railroad, the Catholic Institute for the Care of Orphans, New Orleans University, the Religious Order of the Holy Family, the Little Sisters of the Poor and the Lafon Old Folks Home.

Lafon was also active in politics during the Civil War. He help found the Friends of Universal Suffrage, an interracial organization committed to securing the vote for African American males.
A successful real estate broker and business man, Lafon accumulated nearly half a million dollars – a great sum in his day. Lafon died on Dec. 22, 1893 and was buried in New Orleans’ St. Louis Cemetery No. 3.  Even in death his generosity continued.  His will left $500,000 to various New Orleans charities include the Institution Catholique des Orphelins Indigents, a school for poor African American children.  Shortly after his death the Louisiana Legislature recognized Lafon for all the contributions he had made to New Orleans.