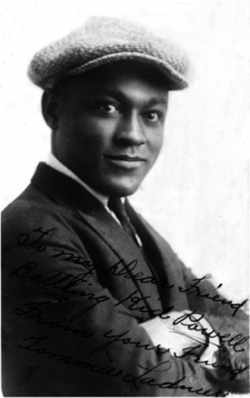 Jazz trumpeter Thomas “Tommy” Ladnier was born in Florenville/Mandeville, Louisiana on May 28, 1900. His father was Alfred Ladnier and his mother Willie Williams Ladnier. He played in local bands beginning in 1914 and one of his teachers was trumpeter Bunk Johnson. In 1917, Ladnier became part of the Great Migration of African Americans from the South to Northern cities when he relocated to Chicago with his mother.  Three years later, he married Hazel B. Mathews.

In 1925, Ladnier joined pianist Sam Wooding for his first European tour (Germany, Sweden, Denmark, Spain, and Russia). He returned to New York City and played with the Fletcher Henderson Orchestra from October 1926 to November 1927. The Henderson Orchestra was then at its prime and Ladnier was one of the main soloists making some of the most cherished Henderson recordings during this year. Ladnier then rejoined the Sam Wooding Orchestra for another European tour (Germany, Austria, Turkey, Switzerland, Italy, and France) but left Wooding in January 1929 to work as a free-lancer in Paris until summer 1930.  While in Paris he joined Noble Sissle’s dance band which was then performing in Paris and London. Sissle returned to the United States at the end of 1930 and Ladnier remained with him until January 1932. During that time, they did a U.S. tour and took another short visit to Paris.

In 1932, Ladnier teamed up with saxophonist Sidney Bechet, forming the New Orleans Feetwarmers where they made what are now considered classic jazz recordings. During the Great Depression, Ladnier and Bechet ran a small tailor shop in Harlem. Ladnier continued to play periodically along the East Coast, sometimes giving trumpet lessons. For a year, he lived in Stamford, Connecticut.

Tommy Ladnier’s recordings with Paramount Records earned him the name “The Praying Cornet.” During this period, he developed a more direct style inspired by Louis Armstrong, which he later refined into a forerunner of the swing style. Ladnier’s use of syncopations was outstanding and his intensity sometimes overwhelming. In his last recordings his playing is more simplified. Ladnier was a true jazz improviser whose varied playing can be heard in the many alternate take recordings. Tommy Ladnier also learned during his European years that skin color was not so important there and he loved the “colorblind” Frenchmen.

In 1938, Ladnier made a series of recordings with clarinetist Mezz Mezzrow.  Later that year he reunited with Bechet for one recording session and then participated in the first Spirituals to Swing concert in December 1938. His very last recordings were with singer Rosetta Crawford in February 1939.

Tommy Ladnier died of a heart attack in New York City on June 4th, 1939. He had just turned 39 and was buried at Frederick Douglass Memorial Cemetery in Staten Island, New York.