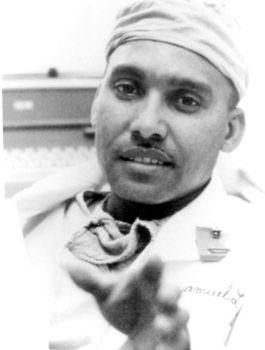 Renowned surgeon and pioneer in organ transplants, Samuel Lee Kountz was born on August 20, 1930 to Samuel Kountz, Sr. and Emma Montague in Lexa, Arkansas.   He was raised in the town of Lexa, one of the most impoverished areas of Arkansas.  Without a doctor in the town, Kountz’s father often assumed the role of nurse and his mother was a midwife.  Their work sparked Kountz’s desire to become a physician.

Kountz worked his way through high school despite scarce educational resources.  He then attended Arkansas Agricultural, Mechanical and Normal College (now the University of Arkansas at Pine Bluff) and graduated with a B.S. in 1952.  He received a M.S. in biochemistry from the University of Arkansas and then became the first African American admitted into the medical school there, from which graduated in 1958.  That same year he married Grace Akin.  The couple had three children.

During his residency at Stanford University School of Medicine, Kountz focused on surgery, becoming particularly interested in kidney transplants.  Up until 1960 such transplants were impossible unless the donor and recipient were twins.  Transplants between those more distantly related or unrelated ended in rejection by the transplant recipient.

In 1961 Kountz and Roy Cohn, another leading surgeon, preformed the first successful kidney transplant between two people who were close relatives but not twins.  Over the next decade Kountz researched the process of kidney transplants on dogs.  He discovered that monitoring blood flow into the new kidney and administering methylprednisolone to the patient after surgery allowed the body to accept the new organ.

In 1966 Kountz joined the faculty at Stanford University Hospital and Medical School and in 1967 he became the chief of the kidney transplant service at University of California at San Francisco (UCSF).  There he worked with Folker Belzer to create the Belzer kidney perfusion machine.  This innovation kept kidneys alive for 50 hours after being removed from the donor.  Through Kountz’s involvement at UCSF, the institution’s kidney transplant research center became one the best in the country.  Kountz also created the Center for Human Values at UCSF, to discuss ethical issues concerning transplants.

The State University of New York, Downstate Medical Center in Brooklyn recruited Kountz in 1972 to become the professor and chair of the department of surgery.  He accepted, saying he wanted to improve medical care for African Americans in urban areas like Brooklyn.

Kountz’s pioneering work has made kidney transplants fairly routine today.  He won numerous awards and was elected president of the Society of University Surgeons in 1974.  Kountz also traveled the world to share his expertise.  Unfortunately, in 1977 he contracted an unknown disease while in South Africa, which caused serious brain damage.  Samuel Kountz died on December 23, 1981 at his home in Kings Point, New York.  He was 51 at the time of his death..