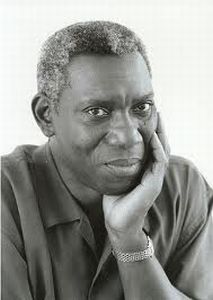 Pulitzer Prize-winning poet and educator Yusef Komunyakaa was born James Willie Brown, Jr., in 1947 in Bogalusa, Louisiana, a segregated mill town. Although Komunyakaa described Bogalusa as “culturally desolate,” he loved to read and discovered poetry in elementary school. As a teenager, he found inspiration in James Baldwin’s essays, Nobody Knows My Name (1961).

After high school he enlisted in the U. S. Army and served in Vietnam from 1969-1970 as a correspondent and later managing editor of the Southern Cross, a military newspaper. Komunyakaa considered desertion due to his opposition of the war; however, he remained in the service in order to “bear witness” and eventually earned the Bronze Star for his work with the paper.

His first book of poetry, Dedications & Other Darkhorses, was published in 1977 followed by Lost in the Bonewheel Factory in 1979 and Copacetic in 1984. The third volume was a collection of poems recalling his childhood in racially tense Bogalusa.

Komunyakaa’s Vietnam years were the focus of his I Apologize for the Eyes in My Head (1986), and his 1988 volume, Dien Cai Dau (which is the Vietnamese word for “crazy,” a word used by Vietnamese soldiers that applied to all American soldiers.).  His critically acclaimed Neon Vernacular (1994) won the Pulitzer Prize, the Kingsley Tufts Award and the Faulkner Prize all in the same year.

As an adult, for personal and religious reasons, James Willie Brown, Jr., changed his name to Yusef Komunyakaa, chosen for its West African derivation. In addition to his writing career, he has held several academic posts. He taught at the University of New Orleans from 1982 to 1984 and served simultaneously as a visiting poet for the New Orleans public school system. He also taught at the University of Indiana, the University of California at Berkeley (as Holloway lecturer), Washington University in St. Louis, and Princeton University, where he obtained a tenured position. In 1999 he was elected a Chancellor of the American Academy of Poets.

He is marred to Australian writer Mandy Jane Sayer and currently is a professor at New York University.