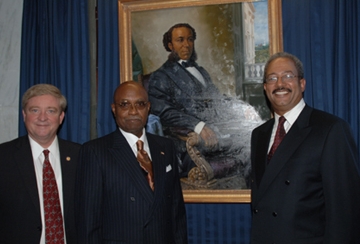 In 2004 former President Clinton’s and former First Lady Senator Hillary Rodham Clinton’s official oil portraits were revealed in the East Room at the executive mansion.  The artist, Simmie Lee Knox, became in 2002 the first African American artist to get a presidential commission to paint official portraits.  On Monday, June 14, 2004, at the unveiling of the Clinton portraits, Knox became the first black American artist to have painted an official portrait of a president, as well as to have painted an official portrait of a first lady, for the White House art collection.

Knox was born on August 18, 1935 in Aliceville, Alabama, the son of Simmie Knox Sr., a mechanic and carpenter, and Amelia Knox.  When he was three years old Knox’s parents divorced, and he was sent to live with relatives, most of whom were poor sharecroppers, in Leroy, Alabama. At age nine Knox moved to nearby Mobile, Alabama, to live with his father and stepmother Lucille.

Throughout his childhood Knox showed an interest in drawing.  He also liked to play baseball with his friends, one of whom was a boy in his neighborhood by the name of Hank Aaron.  An accident at age 13, when Knox was hit in the eye with a ball, left him with visual focusing problems.  In order to help retrain his eye muscles, a doctor recommended that Knox practice sketching. The nuns at his school, the Most Pure Heart of Mary Catholic, noticed how talented Knox was and subsequently gave him many opportunities to provide art images for the school.

For three years, after graduating from Central High School in Mobile in 1956, Knox served in the U.S. Army. In 1962 Knox attended morning classes at the historically black Delaware State College in Dover, and worked at a textile factory in the afternoon.  Knox’s drawings in his biology classes exhibited such proficiency that in 1963 Knox transferred to the University of Delaware, majoring in art education and fine arts. In 1970 Knox graduated summa cum laude from the Tyler School of Art at Philadelphia’s Temple University.  Two years later he earned a Master of Fine Arts degree there.  While at Tyler, Knox worked part time teaching at Pennsylvania’s Lincoln University.

During the 1960s and 1970s abstract art was in vogue, and Knox’s professors persuaded him to work in that style.  In 1972 Knox moved to the Washington, D.C. area, where for years his large-scale abstracts were exhibited at the Corcoran Gallery, as well as at the Kreeger Museum. Knox also taught art in public schools, at Bowie State College in Maryland, and at the Duke Ellington School of the Arts in Washington. In 1974, while working as director of the Museum of African Art in D.C., Knox painted a portrait of Martin Luther King, Jr. In 1975 Knox got a commission to paint a portrait of Frederick Douglass, which is presently at the Smithsonian.

Knox has been married twice and has three children.  Daughter Sheri was born in 1961, when Knox was married to his first wife Marceline Ward. With current wife, Roberta, Knox has two grown children, Zachary and Amelia. Knox loves music, and often listens to jazz while he paints.