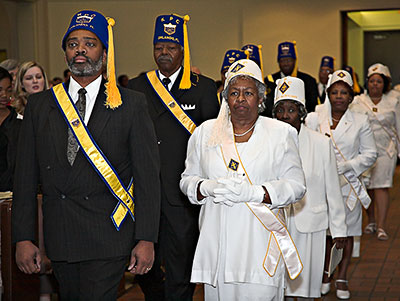 By 1910, the Knights of Peter Claver had branches in Norfolk and Richmond, Virginia; Nashville, Tennessee; and several towns in Mississippi. They later spread to the North as well and became a national presence by 1946.

The Knights were not initially active in the fight to desegregate the Catholic Church. One man, Marcellus Dorsey, was expelled from the order when he wrote articles criticizing racial segregation in the Church. By 1939 the Knights began to oppose segregation. They created a committee to support black priests and refused to send black priests to Africa, instead wishing to keep them in the United States to support the domestic black Catholic community. During the civil rights movement, the Knights also worked with the National Association for the Advancement of Colored People (NAACP) and the National Urban League.

The Knights of Peter Claver are named for Saint Peter Claver, a Jesuit priest. St. Peter Claver was born in Spain in 1581 and served the poor in Colombia and the West Indies. The objectives of the organization stem from the work of St. Peter Claver. These include promoting civic and social justice, contributing to charity, awarding scholarships, and nurturing relationships with the community, youth, and family. The Knights carry out their mission through several divisions, including the Ladies Auxiliary, the Junior Division, Junior Daughters, the Fourth Degree Knights, and the Fourth Degree Ladies of Grace. The Knights also publish a semi-annual newsletter called The Claverite.

The order is now headquartered in New Orleans, Louisiana and has over 100,000 active members. They also support a scholarship program at Xavier University, the only historically black Catholic university in the United States.