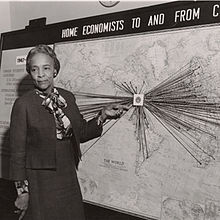 Flemmie Kittrell was born on December 25, 1904 to James and Alice Kittrell in Henderson, North Carolina. Kittrell attended Hampton Institution in Virginia (which has since changed to Hampton University) and received her bachelors of science in 1928. Kittrell’s undergraduate degree was in home economics and after encouragement from her professors, Kittrell enrolled in Cornell University in New York, earning her master’s in 1930 and followed by a Ph.D. in nutrition with honors in 1938. When she finished her Ph.D., Kittrell became the first African American woman to receive a doctorate in nutrition. As she began her academic career, Kittrell used her foundation to change home economics and nutrition, shaping how the fields utilized scientific research and evidence to interact within a local and global context.

While offered a teaching position at Bennett College in Greensboro, North Carolina in 1928, Kittrell only accepted the offer after the completion of her Ph.D. She transferred and began working at Hampton University as the dean of women and head of the home economics department in 1940. However, in 1944, Kittrell was offered the head of home economics position at Howard University in Washington D.C., where she then spent the remainder of her career.

Kittrell was interested in the applications of home economics to different aspects of problem-solving. She founded Howard University’s nursery school, and the research from this development led to her contribution to the creation of programs like Head Start.

Kittrell’s focus shifted in 1947 to an international level with a project sponsored by the U.S. Department of State regarding research on nutrition in Liberia. It was through this research that Kittrell coined the term “hidden hunger” as a subcategory of malnutrition. This term refers to the reality that a person can feel full, but the body did not take in the nutrients that were needed.

In 1950, Kittrell received a Fulbright award to carry out nutritional research at Baroda University in Vadodara, India. There Kittrell helped establish the university’s new department of home economics. Kittrell also taught food and nutrition, while facilitating exchange programs for Indian women to spend time studying in other countries. Then in 1957, Kittrell engaged in research in Japan and Hawaii. At the age of 58, Kittrell traveled to the Congo in 1962 where she created new departments in the young country’s new institutions of higher education that implemented home economics curriculum.

Kittrell was recognized for her work. In 1955 she was named Hampton University’s outstanding alumna. She also received the National Council of Negro Women’s Scroll of Honor in 1961, and was given an achievement award from Cornell University in 1972. Two years later she received an honorary degree from University of Carolina in Greensboro. Additionally, the American Home Economics Association created a scholarship in her honor.

Although Kittrell officially retired in 1972, she continued working and teaching as a Visiting Fellow for Cornell University (1974-1976) and Senior Research Fellow for the Moton Center at Hampton (1977). Kittrell was an active member for the American Association of University Women with the branch in Washington D.C. and the national Program Development Committee. Flemmie Pansy Kittrell died on October 3, 1980 in Washington D.C. from a heart attack. She was 75.