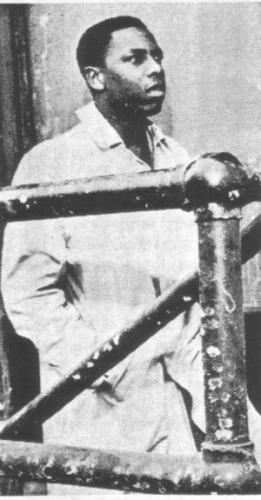 Theatre pioneer Woodie King Jr. is a director, actor, playwright, screen-writer, television scriptwriter, essayist, short-story writer, and consultant. Hailed as “the Renaissance Man of Black Theatre,” he was the most successful and prolific black producer in the world. For over 35 years, as founding director of the seminal New Federal Theatre (NFT), King produced nearly 200 theatre productions and over 5,000 performances and provided a showcase for over 1,000 actors, directors, and designers.

King was born on July 27, 1937 in Baldwin Springs, Alabama. His family moved to Detroit where he grew up.  King received his theatrical training at Cass Technical High School in Detroit in the mid-1960s, Will-O-Way School of Theatre, Bloomfield Hills, Michigan (1958-1962), Wayne State University, and the Detroit School of Arts and Crafts. He also studied drama with Lloyd Richards under a 1965 John Hay Whitney Fellowship.

As co-founded of the Concept East Theatre (CET) in Detroit with Ronald Milner in 1960, King held the position of manager and artistic director. He directed several plays by some of the leading black writers, such as Milner and Amiri Baraka (LeRoi Jones), and by white playwrights such as Edward Albee.

While touring a production of A Study in Color (1964) that played in New York City at the newly formed American Place Theatre, King was asked to stay and direct five plays as works-in-progress. He soon attracted the attention of The Harlem Youth Opportunity Unlimited, Inc. Associated Community Teams (HARYOU)-ACT which asked King to write a proposal for a cultural arts program. The group was awarded a budget of $225,000 to start a theatre program. King was hired as cultural arts director of Mobilization for Youth (MFY) to teach dance, arts, and theatre.

From 1965 to1970, King produced and directed a number of plays and award-winning short films and was also involved in several other projects. King is also the author of two plays, Simple Blues, an adaptation of work by Langston Hughes, and the Weary Blues, also adapted from Langston Hughes.

After the demise of MFY in 1970, King conceived the idea of the New Federal Theatre at the Henry Street Settlement in New York City. This location, on the Lower East Side, has housed a combination of black, Jewish, Asian, and Latino theatres.

King is the recipient of an array of theatre honors and awards. Among them are the John Hay Whitney Fellowship (for directing 1965, 1966), several Audelco Awards and National Black Theatre Festival awards. King’s alma mater, Wayne State University, awarded him an honorary doctorate in humanities in 2000.  In 2005, King was honored along with Douglas Turner Ward as a Theatre Pioneer at New York’s Town Hall.