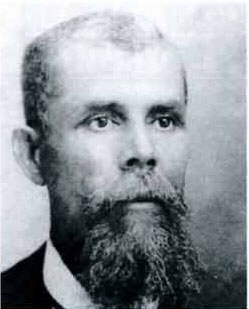 John T. King was born in Girard (now Phenix City), Alabama in 1846. He was the son of covered bridge designer and builder Horace King.  John King carried on the family business by designing and building bridges, houses, and commercial buildings in Georgia and Alabama.  The King family did much to develop West Georgia and East Alabama and open up the area for commerce.  John King also served long tenures as a church leader, and trustee of Clark College in Atlanta.

King started his career at age fourteen as bridge keeper for the Dillingham Bridge in Columbus, Georgia.  He moved to LaGrange in 1872 with other family members.  As his father’s health began to fail, John became head of King Brothers Bridge Company, a thriving business in western Georgia and eastern Alabama in the late nineteenth century.  The company not only built bridges, but also designed and built in the town of LaGrange the Lloyd Building on East Court Square, a sash and blind factory operated by the Kings, the Hotel Andrews, numerous houses, and the LaGrange Cotton Oil Factory which was the town’s first “modern” textile mill to be built following the Civil War.  Covered bridges that John King designed and constructed included one in LaGrange, West Point, Columbus, and eastern Alabama.

John King was a trustee of Atlanta’s Clark College from 1893 to 1918 and in 1924 and 1926.  King strongly believed in the saying “Ignorance breeds poverty” and continually urged blacks to go to school and to church.  Thanks to business contacts he made through service to Clark College, King was awarded the contract to build the Negro Building (1895) at the Cotton States and International Exposition held in Atlanta, which became famous because of Booker T. Washington’s “Atlanta Compromise” speech when he repudiated civil agitation for racial equality.  During the exposition, “models of the most useful inventions of colored men” were shown, according to a reporter for the New York Observer Exposition Supplement.

John King died on November 9, 1926.  He is buried at Eastview Cemetery in LaGrange.  His obituary in the LaGrange Reporter stated that “he had the confidence of a large circle of white friends.  Among his own race, he was a constructive leader and wielded a wholesome influence.”