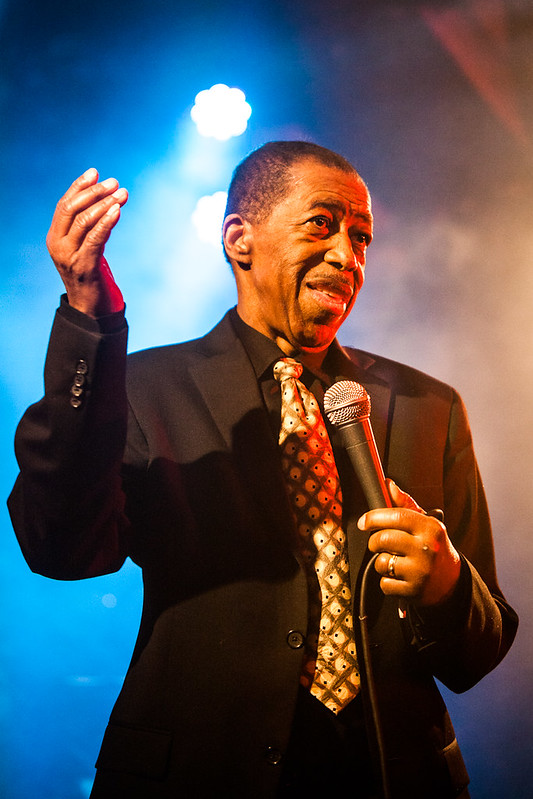 Hear a soundtrack specially chosen to enhance your learning about Ben E. King (1938-2015)

Born Benjamin Earl Nelson on September 28, 1938 in Henderson, North Carolina, he and his family moved to Harlem, New York when he was nine years old. There he worked in his father’s luncheonette, sang in church and formed a doo-wop group called “The Four B’s.” The band consisted of two twin brothers, a friend, and Ben himself, all of whom had names beginning with the letter B. The Four B’s performed at the Apollo Theater in 1955 for a talent contest and won second place.

In 1956, 18 year-old Ben joined another doo-wop band called the Five Crowns after being spotted by local talent manager Lover Patterson. As long as it didn’t interfere with helping at the restaurant, Ben Nelson was free to join in and have fun. In 1958, while performing at the Apollo Theater at the same time as the original members of The Drifters, the Crowns attracted the attention of George Treadwell, the owner of the name “The Drifters.” Increasingly unimpressed by his singers who remained after lead singer Clyde McPhatter was drafted into the Army, Treadwell hired the Crowns and renamed them the Drifters. In this period with King as the lead singer, the Drifters had hits such as the 1959 single “There Goes My Baby” and the 1960 single “Save the Last Dance for Me,” which was the group’s only song to reach number one for both R&B and pop charts.

In 1960, Ben Nelson approached Treadwell about a salary increase and fairer disbursement of royalties. When negotiations stalled, Nelson quit the Drifters and acquired his stage name, Ben E. King, the “King” coming from the name of his favorite uncle, and began a new solo career. King however remained with Atlantic Records, recorded his first solo hit, “Spanish Harlem,” in 1960, which hit the Top Ten on the R&B and pop charts.

King’s 1961 single “Stand by Me” hit the pop Top Five, and has endured as an R&B classic and King’s signature song. In 1999 it was voted a Song of the Century by the Recording Industry Association of America (RIAA). The song received a resurgence in the 1970s when John Lennon covered it. It has also played in countless movies and made other appearances in pop culture, including in 1986 when a Stephen King-based movie by the same name caused another resurgence in popularity.  Two of King’s songs, “Spanish Harlem” and “Stand by Me,” and two songs from the Drifters, “Save the Last Dance for Me” and “There Goes My Baby,” were named part of the Rock & Roll Hall of Fame’s 500 Songs that Shaped Rock and Roll, and were given a Grammy Hall of Fame award.

Though his career faded with the “British Invasion” of the mid-1960s, King managed several more hits and continued to tour and perform. He performed with a different generation of Drifters in 1982 and was inducted into the Rock & Roll Hall of Fame in 1988. King was active with his Stand by Me Foundation, a charity dedicated to children’s education.

On April 30, 2015 after falling ill from an unidentified sickness, Ben E. King passed away at 76 years of age in New Jersey’s Hackensack University Medical Center. He was survived by his mother, Jenny Nelson, his wife of fifty years, Betty Nelson, his three children, Terris Cannon, Benjamin King Jr., and Angela Matos, as well as his six grandchildren.