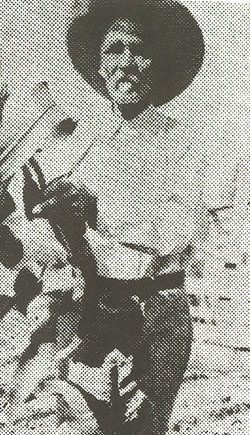 Ben Kinchlow began life as a free black in Texas, when most African Americans were slaves. After the Texas Revolution, the new Republic legalized slavery and free African Americans were at risk of being sold back into slavery. Ben’s mother, Lizaar Moore, a half-white slave woman obtained her freedom from Sandy Moore, in Wharton County and in 1847 with one year old Ben and her other son journeyed to Mexico.

The family settled in the border area of Matamoros where Lizaar worked washing clothes, charging $2.50 a dozen for men’s clothing and $5.00 for women’s. Young Ben learned to ride and break horses and stayed in Mexico about twelve years before moving to Brownsville, where he lived until emancipation.

Working on the Bare Stone Ranch, Kinchlow became acquainted with Captain Leander McNelly and, at nineteen became a guide for McNelly working without pay. So began the Texas Ranger life of the earliest known African American with the Special Force or McNelly’s Rangers. When McNelly died Kinchlow returned to working cattle and breaking horses. He worked on the Banqueta Ranch as well as the King Ranch with horse breaking his main responsibility. Then he moved onto Matagorda County where worked as a cowhand on the Tres Palacios Ranch. He worked for twelve years getting fifty cents a head for every Maverick he roped and branded.

Beginning in 1867 Kinchlow participated in many of the Texas to Kansas cattle drives.  By 1976, however, he retired from the trail and married Christiana Temple.  The couple had six children. Kinchlow later settled in the Uvalde area with his second wife Eliza Dawson. Although the precise date of his death is unknown, 91 year old Kinchlow in 1939 was still living in the Uvalde area.