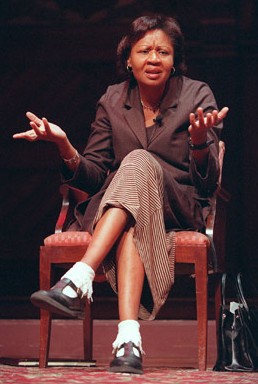 Writer Jamaica Kincaid was born Elaine Potter Richardson on the Caribbean island of Antigua on May 25, 1949, when it was still under British colonial rule. At age three, Kincaid was taught to read by her mother but was later neglected when three boys were born to the family.  Kincaid attended schools on the island, however with few opportunities available to females, she began apprenticing as a seamstress after school as a very young girl. Childhood experiences of exploitation and oppression would be integral themes in her later writing.

In 1965, soon after she turned 16, Kincaid left Antigua to work as an au pair in Scarsdale, New York.  She earned a high school equivalency diploma and enrolled in photography classes.  After finding her writing voice through poetry to accompany her photographs, Kincaid wrote a series of articles for Ingenue magazine, interviewing celebrities about their teen years.  In 1974, she began writing for the New Yorker column, “Talk of the Town.”  Her first book, At the Bottom of the River (1983), gathers the stories she had published in the New Yorker between 1978 and 1979.

Kincaid changed her name to Jamaica Kincaid in 1973 at the age of 24 to both give her the anonymity needed to write about intensely personal material and to identify herself with a specific region of the Americas—a region marked by exploitation and the violent history of slavery.  The process of renaming is a theme portrayed throughout Kincaid’s works, where renaming is often used as a metaphor for conquest and colonial domination.

Other themes found throughout her texts include betrayal, loss, and division, all resulting from colonial exploitation and the disempowerment of women.  Kincaid’s anger at the colonial exploitation of non-white Caribbean people erupted in her book, A Small Place (1988).  In her more recent work, Kincaid continues to explore the theme of domination but through the metaphor of gardening and plants.  In 2005, she published Among Flowers: A Walk in the Himalaya, a project funded by National Geographic.

A prolific writer, Kincaid has won several awards and two honorary doctorate degrees.  Kincaid is now a visiting professor in the department of African and African-American Studies at Harvard University.  She was recognized for The Autobiography of My Mother (1996) in 1997 as a finalist for the National Book Critics Circle Award for fiction and the OPN Faulkner Award.  Kincaid and her family live in Bennington, Vermont.