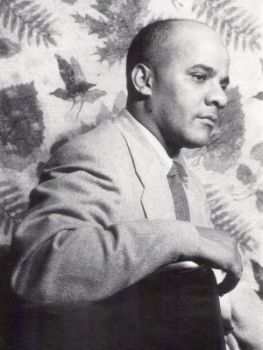 Twice nominated for the Pulitzer Prize, John Oliver Killens was an editor, essayist, activist, critic and novelist who inspired a generation of African American writers through his Harlem Writers Guild. He inspired such literary artists as Rosa Guy, Maya Angelou, Ossie Davis and Audrey Lorde. The great grandson of former slaves, whose stories he heard first hand, Killens was born in Macon, Georgia in 1916. The segregated, racist world of his youth in the South and the military during young adulthood, in which he served during World War II, became the backdrop and central themes of his work.  He attended Morris Brown College, Howard University, Columbia University and New York University.  He later taught at Fisk and Howard Universities and was writer-in-residence at New York’s Medgar Evers College.

Writing within the tradition of the protest novel created by Richard Wright, Killens published his first novel, Youngblood (1954), which, set in Crossroads, Georgia, tells the story Youngblood family’s effort to live with dignity in the Jim Crow South rather than migrating to the North. Killens’ second novel, And Then We Heard the Thunder (1962), details the experiences of a soldier, Solly Saunders, in the segregated military. Killens traces Saunders’ route from basic training in Georgia to battlefields throughout the South Pacific.  Killens’s third novel, ‘SIPPI (1967), begins with the history making Supreme Court 1954 decision in Brown v. Board of Education, which declared illegal segregation in education. Wishing to enact his own end to segregation, the protagonist, Jesse Chaney, a black sharecropper, confronts Charles Wakefield, a Mississippi plantation owner and so-called “friend of the Negro.” Wakefield calls him “nigger,” to reveal his disapproval of the Court’s decision. Killens, like Wright, rips the veil off black and white relationship in the South that remained a legacy of slavery. Set in the North, Killens’s fourth novel, The Cotillion, Or One Good Bull Is Half the Herd (1971), satirizes and critiques intra-racial issues he associates with the black middle class and class division within the black community through his heroine, Yoruba, a black militant.  Killens wrote two screenplays, Odds Against Tomorrow (1959) and Slaves (1969), which was also published as a novel.

A major proponent of the value of a black aesthetics, Killens published in such journals as The Black Scholar, Negro Diges and Black World.  He also published Black Man’s Burden (1965), a collection of essays.  He collaborated with Jerry Ward to compile Black Southern Voices: An Anthology of Fiction, Poetry, Drama, Nonfiction, and Critical Essays (1992). John Oliver Killens died of cancer in Brooklyn, New York at the age of 71.