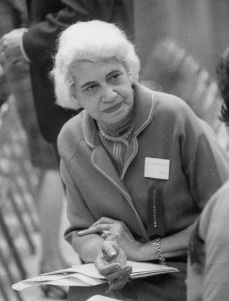 Businesswoman, politician, and civil rights activist, Mae Street Kidd, was born February 8, 1904 in Millersburg, Kentucky to a black mother and white father.  Kidd’s biological father refused to acknowledge her as his daughter.  She attended a segregated black primary school in her community.  As a teenager, Kidd enrolled at Lincoln Institute in Simpsonville, Kentucky, a boarding school for African Americans.

After completing school, Kidd moved to Louisville.  She became a successful life insurance agent at the black owned Mammoth Life Insurance Company.  During World War II, Kidd served with the American Red Cross in England.  Following the war, she became an entrepreneur, opening a cosmetic and an insurance company in the Midwest.

Kidd became active in the burgeoning civil rights movement in Louisville.  In 1948, she founded the Louisville Urban League Guild.  Kidd became more politically active in her sixties.   She served in the Kentucky House of Representatives from 1968 to 1984, representing Louisville’s 41st legislative district.  Kidd co-sponsored legislation to make Dr. Martin Luther King Jr.’s birthday a state holiday and the Kentucky Fair Housing Act of 1968, which provided accessible and low-income housing to all Commonwealth residents.   In the 1970s, Kidd continued her housing advocacy efforts, and following a two year battle on the House floor, she introduced House Bill No. 27 to the House, and it became law in 1972.  The law established the Kentucky Housing Corporation, which promoted and financed low-income housing.

During her lifetime, Kidd received numerous honors and awards. The NAACP honored Kidd with the Unsung Heroine Award and she also earned the Louisville Mayor’s Citation for Outstanding Community Service.  In 1976, after years of campaigning in the General Assembly to have Kentucky ratify the Thirteenth, Fourteenth, and Fifteenth Amendments to the U.S. Constitution, that legislative body voted unanimously to ratify all of three.