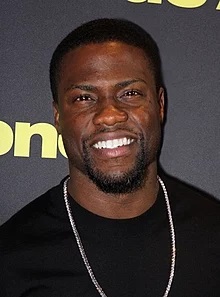 Kevin Darnell Hart is a comedian, actor, and producer. Hart was born in Philadelphia, Pennsylvania on July 6, 1979, to Nancy Hart and Henry Witherspoon. He graduated from George Washington High School and briefly attended The Community College of Philadelphia. Hart lived in New York City and Boston, Massachusetts where he began to pursue a career in comedy.

Hart first performed as a comedian at the Laff House in Philadelphia under the stage name “Lil Kev the Bastard” in the late 1990’s. He was booed off the stage, but not discouraged. He tried to mimic other comedians before developing his own style by delving into his own experiences and insecurities. He honed his acts in comedy clubs across the United States and was eventually signed to a six-figure television network deal, starring in pilots for producer Judd Apatow. His film debut came in Paper Soldiers (2002), and he gained notoriety in other movies, such as Scary Movie, Soul Plane, and The 40-Year-Old-Virgin.

Hart’s first solo comedy tours began in 2009 with “I’m a Grown Little Man,” followed by “Seriously Funny” in 2010, “Laugh at My Pain” in 2011, and “Let Me Explain” in 2013. Both “Laugh at my Pain,” and “Let Me Explain” were later released as feature films. Hart’s “What Now” world tour, filmed at Philadelphia’s Lincoln Financial Field, was also released as a film. At the 2012 BET Awards, Hart performed the opening monologue and released a series of short sketches that he later used in his 2013 television show Real Husbands of Hollywood. The series is intentionally filmed in a style similar to the Real Housewives Series.

With his appearance in Ride Along (2014), opposite Ice Cube, Hart emerged as a major movie star. His next films were Get Hard with Will Ferrell (2015), and Ride Along 2 (2016). Additionally, he starred in Central Intelligence (2016), and Jumanji: Welcome to the Jungle (2017) alongside Dwayne Johnson. Hart has done voice roles in The Secret Life Of Pets (2016) and its sequel released in 2019.

Hart has has also hosted numerous awards starting with the BET Awards (2011), the MTV Video Music Awards (2012), and the NAACP Image Awards (2017). He has also hosted three episodes of Saturday Night Live and in 2016 released a mixtape under the name “Chocolate Droppa” on the Motown Records label. Hart was slated to host the 91st Academy Awards in 2018 but stepped down amid controversy over homophobic tweets from 2010 and 2011. He was married to Torrei Hart but the couple divorced in 2010 and in 2016 he married Eniko Parrish. The couple have two children.

In August 2020, while performing at Dave Chappelle’s An Intimate Socially Distanced Affair comedy show in Yellow Springs, Ohio, Hart revealed that he was diagnosed with COVID-19 in March. He joked that he found out around the same time Tom Hanks and wife Rita Wilson revealed their diagnosis, but since Hanks was more famous than him, he kept it to himself.