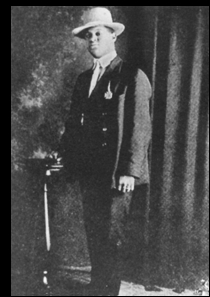 Pioneer jazz musician Freddie Keppard was one of the most famous cornet players of the early 20th Century.  Born February 27, 1890 in New Orleans, Keppard came from a musical family which included his brother Louis Keppard, who also became a professional musician playing the piano and tuba. Freddie Keppard began his musical career with the mandolin, followed by the violin, accordion, and finally finding his passion with the cornet.  At the age of 16 he organized the Olympia Orchestra to showcase his talents and perform throughout New Orleans.

Keppard became part of the migration of Creole jazz musicians to the West Coast in the first two decades of the 20th Century.  After traveling to Los Angeles, he founded the Original Creole Orchestra in 1912.  The Orchestra introduced New Orleans jazz to a wider audience and quickly became one of the most popular acts on the West Coast.  By 1919 it had a following in large cities across the United States.  As his popularity rose, the Victor Talking Machine Company eventually offered Keppard the chance to be one of the first to record the new jazz sound. Keppard refused the recording offer saying he was fearful people would “steal his stuff.”

Keppard toured with numerous bands throughout his career including ensembles led by Mae Brady, Doc Cooke, Erskine Tate, and Ollie Power.  By the early 1920s he was one of the most well-traveled musicians of his time with fan bases in Los Angeles, New York, New Orleans, and Chicago.  Keppard developed a following in Europe despite never having played there.  Although little of his music has survived on vinyl, Keppard made some recordings in 1926 with Erskine Tate’s Vendome Orchestra and his own group, the Jazz Cardinals.  Like many of the first generation of the traditional New Orleans jazz players who seldom recorded, he remained in the shadow of other New Orleans artists such as Louis Armstrong who recognized the power and importance of the new entertainment technology.

By the mid-1920s Keppard also battled alcoholism and became an increasingly unreliable band member.  He stopped working altogether in 1928.  Freddie Keppard died in Chicago, Illinois, on July 15, 1933, after a long battle with tuberculosis.   He was 43.