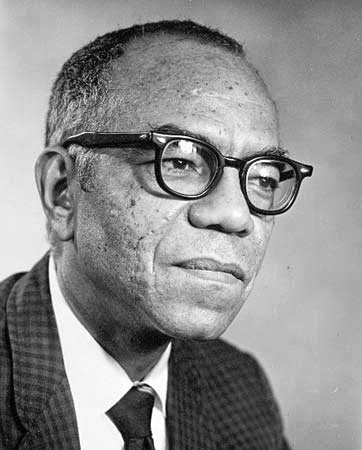 Hear a soundtrack specially chosen to enhance your learning about Ulysses S. Kay (1917-1995)

Ulysses Simpson Kay, Jr., was one of the leading black composers in the classical music industry in the 20th Century. Born in Tucson, Arizona, Kay grew up in a musically talented family. His mother, Elizabeth Kay, was a church pianist.  His step-brother played the violin and his step-sister played piano. His father Ulysses Kay, Sr., a former Texas cowboy and barber, did not play any instruments, but enjoyed listening to music and singing.  His maternal uncle, of whom Kay was very fond, was the highly acclaimed jazz musician King Oliver.

Kay studied piano, violin, and saxophone as a child and was later in the glee club, marching band, and jazz band in his Tucson high school. After graduating from the University of Arizona in 1938 with a degree in music education, he earned a master’s degree in composition at Eastman School of Music in Rochester, New York.  His first compositions were written at Eastman. In the summer of 1941 Kay entered the Berkshire Music Center (later named Tanglewood) in western Massachusetts after performing in the Berkshire Festival.  At Berkshire he met and studied with neoclassical composer Paul Hindemith, whom Kay also followed to Yale University for one year of post-graduate study in music.

In 1942 Kay joined the U.S. Navy and played in its band during World War II.  There he acquired proficiency on a number of band instruments including the saxophone, flute, piccolo, and piano.  After the war, Kay continued his formal music education, studying composition at Colombia University in 1947 on the Alice M. Ditson Fellowship (1946).

In 1947 Kay traveled to Rome, Italy to continue his studies, financed by a series of scholarships including a Julius Rosenwald Fellowship (1947), a Fulbright Scholarship (1949) and the Prix de Rome (1949, 1951).  He married Barbara Harrison in 1949 in New York and she later joined him in Italy.  Harrison taught music at the Anglo-American Overseas School in Rome. The couple gave birth to their first daughter, Virginia, in 1951 while still in Rome. They returned to the U.S. in 1953 and two more daughters were born: Melinda in 1957 and Hilary in 1959.

From 1953 to 1968, Kay worked for Broadcast Music, Inc. (BMI), the major U.S. performing rights organization, as a music consultant.  In 1968 he was appointed a distinguished professor at Herbert H. Lehman College of the City University of New York and taught there until 1988.  In 1979, Kay was elected to the American Academy of Arts and Letters.   During his lifetime Kay composed approximately 140 musical compositions including five opera, 20 orchestral works, 30 choral pieces, and 15 works for chamber groups.  His ballet, Danse Calinda appeared in 1941.  His most noted composition, Of New Horizons: Overture (1944), was completed while he was still in the Navy and was premiered by the New York Philharmonic Orchestra.  His last opera, Frederick Douglass, was completed in 1985.  Kay was a member of Sigma Pi Phi fraternity.

On May 20, 1995 Ulysses Simpson Kay died due to complications of Parkinson’s disease at the age of 78.  At the time he was a resident of Englewood, New Jersey.