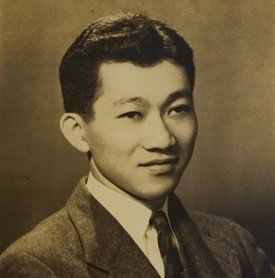 Political activist Reverend Mineo Katagiri was born in Haleiwa, Hawaii on August 1, 1919. He graduated from the University of Hawaii in 1941 and then earned his theological degree from the Union Theological Seminary in New York City, New York in 1944. He was ordained in 1945 and was a minister in several churches in Hawaii and Ohio and taught briefly at Doshisha University in Kyoto, Japan. During his time in the United States he experienced racial prejudice and discrimination directed against Japanese Americans even following World War II. In 1959 Katagiri moved to Seattle Washington where he became the campus minister for the University of Washington as well as the metropolitan minister for the University Congregational Church.

The black-led civil rights movement emerged in Seattle in the early 1960s soon after Katagiri’s arrival. While the Japanese American Citizens League (JACL) and other Asian American groups were slow to support this movement, Katagiri stepped forward. He became the only Asian American member of the Central Area Civil Rights Committee (CACRC), a coalition of local black civil rights organizations. The Committee successfully challenged racial discrimination in the workplace, in housing, and schools thorough the 1960s.

Katagiri also helped form the Coalition Against Discrimination (CAD) to combat discrimination by private clubs like the Elks Club and the Rainier Club. In late 1969, Katagiri persuaded some Asian Americans to participate with black contractors who were protesting their exclusion from most public-sector building projects. These protests were led by the Central Contractors Association which demanded that the regions construction industry be desegregated.

In 1969, Rev. Katagiri founded the Asian Coalition for Equality (ACE) and the First Avenue Service Center for Seattle’s homeless population. ACE was the first civil rights organization in Seattle that sought to mobilize the Asian American community in multi-racial solidarity campaigns and to promote Asian American consciousness. It also sought to fight against anti-Asian sentiment and act in solidarity with the local African American civil rights movement.

ACE specifically protested negative stereotyping of Asian Americans in the media, minimum height requirements for policemen and firemen, and fraternal clubs which excluded Asians and other minorities for membership. ACE supported the Central Contractors Association protests and challenged the Seattle police on their repression of the protesters. Katagiri’s motivation for forming ACE was the assassination of fellow civil rights activist Edwin Pratt.

Katagiri was also the founding director of the Office of Economic Opportunity (OEO) for King County, the major government funded anti-poverty agency. Due to his work, Katagiri earned appointments to the Washington State Council of Higher Education and the Governor’s Advisory Committee on Urban Affairs.

In 1970, Rev. Katagiri moved to New York City to become the director of mission priorities for the United Church of Christ. He was head of the Church’s Northern California Conference from 1975 to 1984 when he retired. He helped to establish and strengthen churches in a number of California’s ethnic communities. This included the First Filipino-American United Church of Christ in San Bruno. He lived in San Francisco and was the trustee emeritus at the Public School of Religion in Berkeley.

Rev. Katagiri was an avid golfer. On November 15, 2005 he passed away from a fall at the San Geronimo golf course in Marin County. He was 86.  Katagiri was married to his wife of 61 years, Nobu Katagiri and the couple had two daughters, Iao, and Laurie, and one grandson, Shane. Rev Mineo Katagiri is buried at Makiki Cemetery in Honolulu, Hawaii.