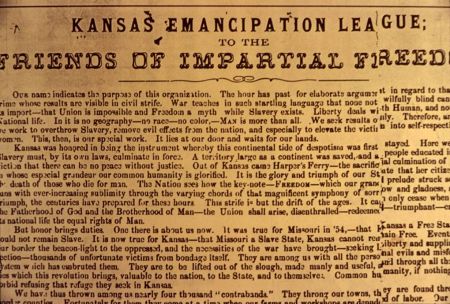 The Kansas Emancipation League’s primary goal was “to bring about emancipation throughout the whole land.” It was initiated at the First Baptist Church in Leavenworth, Kansas in 1862. It also pledged to “support the war until its successful termination,” put an end to the interstate slave trade, protect fugitive slaves from kidnappers who wanted to return them to bondage, and prevent states in rebellion from being reorganized into the Union except on the condition of supporting Emancipation. The League’s bold goal of emancipation was announced during the second year of the Civil War when preserving the Union was central and freeing slaves was still hotly debated.

“The Grim Chieftain” James L. Lane, who was responsible for forming the First Kansas Colored Volunteers, took up the League’s cause and appealed to northern abolitionists at a public meeting at the Cooper Institute in New York City. Lane believed the major portion of contrabands fleeing to Kansas would become productive wage earners if they were given aid to maintain freedom.

The League received editorial support from The Liberator, edited by William Lloyd Garrison. The newspaper was already committed to the anti-slavery movement and joined the appeal for funds, provisions, employment, and clothing. The Salem Observer, based in Salem, Massachusetts, also saw the need to provide education and protection. However, the Providence Evening Press was deeply critical of the style and substance of Lane’s speech. The editor found the goal of “excluding any State from the Union except on the condition of emancipation” especially galling. He argued that “the restoration of the Constitution” was the aim of the war and “who would expand it beyond this limit, is as much guilty of treason as are they who seek to amend its obligations in other and opposite ways.”

The League’s goal of securing emancipation was partially realized with the limited abolition of slavery in the Emancipation Proclamation in 1863, and finally accomplished through ratification of the 13th Amendment to the Constitution in 1865.